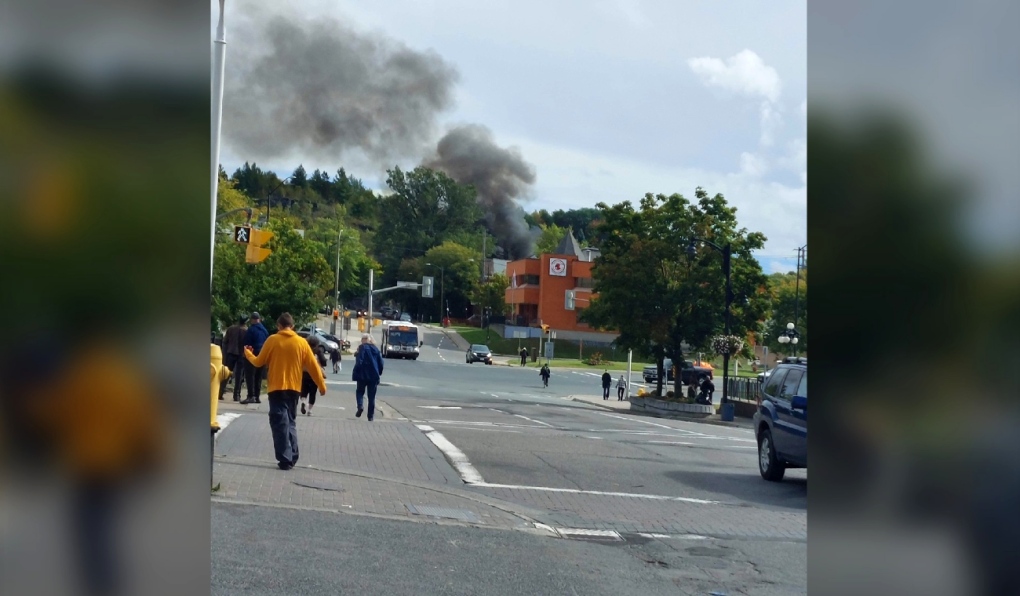 Lots of smoke could be seen in the distance in Sudbury’s downtown around noon as a campfire at a homeless encampment on Raphael Street near the top of the stair from Brady Street had gotten out of control. (Photo credit: Steve Young/Sudbury, Ont.)

Lots of smoke could be seen in the distance in Sudbury’s downtown around noon as a campfire at a homeless encampment on Raphael Street near the top of the stair from Brady Street had gotten out of control.

According to deputy fire chief, Jesse Oshell, the fire is now extinguished.

Oshell told CTV News Northern Ontario that he believes the fire is related to a homeless encampment in the area.

The dark smoke was visible from the Transit Terminal downtown, according to messages CTV News received on social media from residents in the area.

“Fire services will be turning the investigation over to police services,” Oshell said.

There is no danger or damage reported to nearby properties at this time.

Check back to CTV News Northern Ontario for updates on this story as more information comes available.

Prime Minister Justin Trudeau made an appearance on Friday's episode of "Canada's Drag Race: Canada vs. the World" to offer the contestants words of inspiration before the main challenge.

A new study has confirmed the authenticity of an ancient Roman coin long considered fake but which researchers now believe depicts the image of a forgotten emperor.

Prime Minister Justin Trudeau gambled just by showing up. And he appears to have won in the court of reasonable public opinion, Don Martin writes in an exclusive column for CTVNews.ca.

'What if the worst had happened': Trudeau explains why he invoked Emergencies Act when he did

On the stand at the federal inquiry examining the federal government's invocation of the Emergencies Act, Prime Minister Justin Trudeau revealed candidly that a central factor in his historic decision to enact unprecedented powers to shut down the 'Freedom Convoy' protests, was his fear of what could happen if he didn't.

NASA's Orion capsule entered an orbit stretching tens of thousands of kilometres around the moon Friday, as it neared the halfway mark of its test flight.

A marriage annulment that removed a B.C. woman as a beneficiary from her ex-husband's pension plan has been cancelled after a judge determined an "imposter" had agreed to the terms in court.