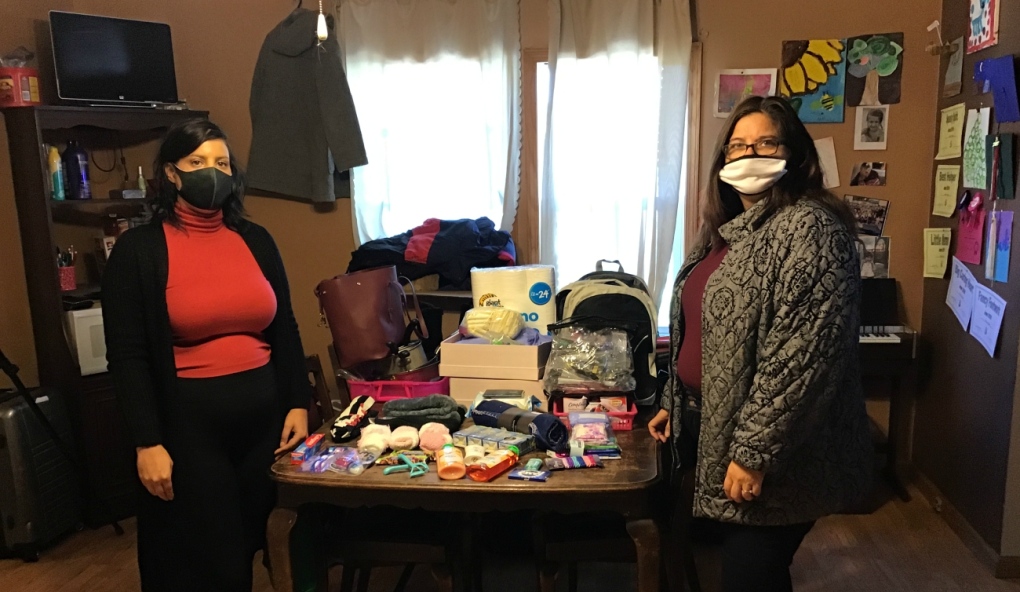 A Massey mother is turning her grief into a mission of mercy with help from her daughters. After losing her son, who struggled with drug addiction earlier this year, her family has decided to forego Christmas to help the Sudbury's less fortunate. (Ian Campbell/CTV News)

SUDBURY -- This has been a difficult year for many Canadians, but it's been a devastating one for Katherine Wright and her family.

A mother of four adult children, Wright lost her son Daniel at the start of the pandemic. The young man had been living on the street and struggling with addiction when someone brought him into the hospital.

"He did this by choice -- he felt his lifestyle was putting us in direct danger and he didn't want to be around us," said Wright. "He would come and visit at Christmas but he would never stay very long."

That pattern continued for while, with Daniel even living with two of his sisters before returning to the street.

"He was sick and he was out on the streets panhandling and some wonderful person had given him a walker, which was awesome because what he told us was that he had Lupus," she said. "We're not sure, but he was very sick and he had trouble walking."

Went looking for him

One day there was a suicidal-sounding post on Facebook, which was already out of the ordinary because Daniel rarely ever went on social media. Police were called. Wright's sister and daughters also took to the streets to look for him.

"When he got picked up and he was taken to the hospital, I spoke to them and they said he was in really bad shape and they could save him if they could keep him," said Wright.

"The doctor described his death as very violent. His organs were shutting down and they must have gotten to him too late … They gave him something to help with the withdrawals. He was vomiting and half and hour later his heart stopped and they couldn't bring him back."

The lockdown had already started at Health Sciences North and Wright's daughter, as the next-of-kin, was the only one allowed inside to make arrangements.

"It's pretty harsh," she said, wiping away the tears. "When these adults tell you they could die if they don't get what they need, they're not lying."

The family has since received cards of condolence and messages from friends, officials, even the police officer who knew and helped Daniel in his final hours while living on the street.

It was her daughter, who has the same birthday as Daniel, who had the idea to collect things for Sudbury's less-fortunate and to help those living on the street in her brother's name.

It didn't take long for the rest of the family to get on board with the idea and they started 'Daniel's Mission' as a result.

The project has since collected donations and raised funds everywhere, from Massey to Sudbury and in between. They plan on donating it later in the year to the men and women at the Elgin Street Mission.

"We knew he was sick, and he told me at his last birthday that he didn't think he was going to see another one," said Katherine. "It still doesn't prepare you. I spent the first two to four months -- I dunno, I had no concept of time -- in bed. I couldn't get out of bed and it's not like I saw him every day. I hardly ever saw him, but I couldn't cope."

Their grief has now turned into a mission of mercy, whether it's long johns, sanitizers, shoes, clothes or masks. They say every little bit will help for those living on the street. Every dollar they raise is also being used to purchase supplies, and if there are those who are not comfortable with donating to them, they're hoping people will consider donating directly to the Elgin Street Mission.

Daniel's sister, Teddie-Ray, has been working behind the scenes to help her mother with things like the social media page and the website.

'Proud of his sisters'

"Daniel was a goofball, he was silly, he was always playing jokes and calling me names," said Teddie-Ray. "He was always very caring, always very supportive and proud of his sisters."

Teddie-Ray said Daniel was the oldest of four children, three girls and one boy.

"He was a good brother. He had his problems as most people do, we just didn't see each other as much as I would have liked," she said.

The sisters have been spearheading the effort for Daniel's Mission and they've already got piles of donations in both Massey and Sudbury.

"I wasn't expecting much, I'm feeling pretty good about it now," she said. "I want people to know, these people they pass every day on the street are people, too, and they need stuff that everyday people need."

Pastor Amanda Robichaud of the Elgin Street Mission said many of their staff and volunteers knew Daniel and they're touched by the family's act of kindness.

"First and foremost, I want to express my deepest condolences to the Wright family," Robichaud said. "It is never easy losing a beloved son, brother and friend. Loss affects everyone differently and yet through difficult circumstances they are turning a tragic loss into something positive. We at the Elgin Street had the opportunity to get to know Daniel and his memory will go on through the generous support of Daniel's Mission."