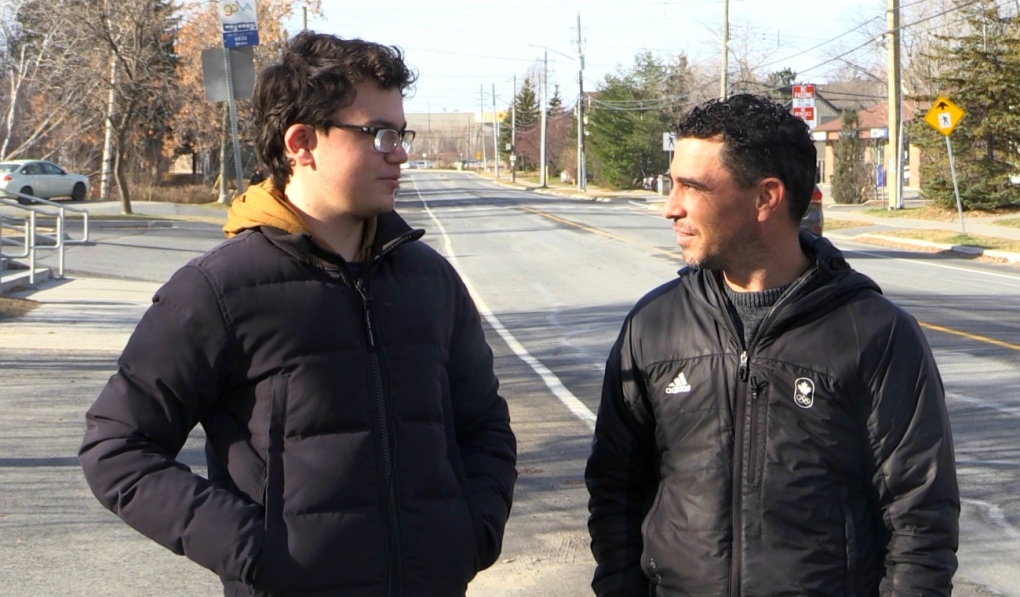 Tanner Spadafora and his dad, Sandro Spadafora,say they are waiting for refunds on a trip Tanner planned to take to Costa Rica. (Dana Roberts/CTV News)

SUDBURY -- After more than half a year, many families in Sudbury are still waiting for refunds on their children’s cancelled school trips.

Tanner Spadafora was looking forward to a trip to Costa Rica for months. He was set to join a group of students dedicating their time towards charity endeavours in the country.

“It seemed like a really great opportunity to diversify and see other cultures that we wouldn’t normally see,” said Tanner. “I mean in Sudbury, you aren’t really getting the Costa Rican food or anything like that and it really seemed like a good idea to help out and build houses in a different country, too.”

Unfortunately, the trip was cancelled due to the COVID-19 pandemic. Now the Spadaforas are like many families across the province still waiting for a refund.

“We purchased what they called the premium plus, so we spent a little bit of extra money,” said Sandro Spadafora, Tanner’s father. “Here we are, the insurance premiums/policies that were purchased, they are claiming that they are not good for anything at this moment and they are still waiting for information.”

Sandro said he’s been bounced between the tour company, Explorica, and its insurance providers, Arch and Old Republic Canada. He said that after all this time, the fact no one will accept responsibility and resolve the issue is frustrating.

“So the kids worked hard, saved their money, a lot of them spent their own money to go forward on these trips and they all looked forward to it and then here we are today, well after the pandemic showed its nasty face for the first time and we’re fighting with insurance companies and the tour operators,” said Sandro.

Four different law firms across the country have teamed up for a class action lawsuit. Sivan Tmarkin, an insurance lawyer involved in that suit, said he anticipates an end in sight for one reason.

“Unlike the majority of lawsuits I deal with where the insurance company takes the position that they don’t have to pay, these insurers here are not taking that position,” said Tmarkin. “Explorica is not taking that position. In fact, if you were to go to Explorica’s website and to the website of these insurance companies, no one is saying that these families are not owed money, they are simply pointing the finger at each other.”

While the Spadaforas are not involved in the class-action suit, they will automatically be included in it should a resolution come. That is due to something called an ‘opt-out’ system, meaning as long as you meet the general criteria of the suit, in this case having a trip that was cancelled, you qualify.

The Rainbow District School Board said it has recently been in touch with the insurance companies.

“Rainbow District School Board recently received a request from Explorica's insurance provider for information regarding the cancelled trips,” the board said in a statement. “We have responded, as requested, to ensure the claims process proceeds as quickly as possible. We share our families' frustration and, like them, hope this matter is soon resolved.”

In response to a request for comment by CTV News, Explorica said it is doing what it can to resolve the situation.

“We are committed to keeping our customers informed about the situation, and we continue to have open communications with school boards to ensure they have the most recent and accurate information to-date,” the company said.