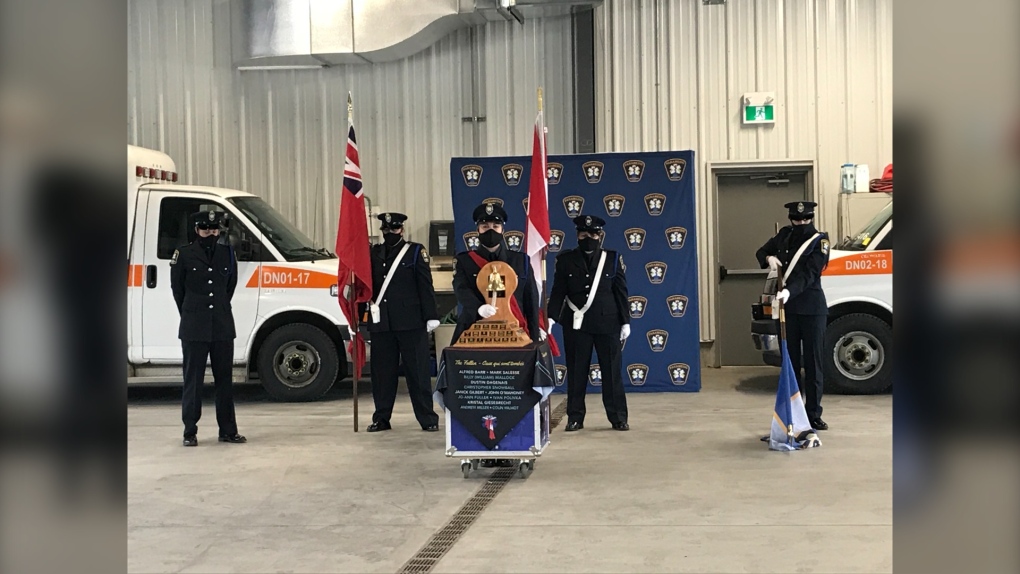 Several different officials took turns during the ceremony to read the names of 51 paramedics who have lost their lives in the line of duty. It also included a moment of silence, speeches from city officials and a drum song to honour the fallen medics. Nov.22/20 (Alana Pickrell/CTV News Northern Ontario)

NORTH BAY -- It was a somber occasion for the city of North Bay as the Paramedic Memorial Bell ceremony took place on Sunday.

The bell rang in memory of 51 paramedics who have lost their lives in the line of duty, giving the District of Nipissing Paramedic Services a chance to remember.

“I have to admit, it did choke me up quite a bit,” said acting paramedic chief Stephen Kirk.

“I tried to practice and just thinking of the sacrifices that individuals have made throughout their career, it definitely hits you in the feels.”

Several different officials took turns during the ceremony to read off the 51 names. It also included a moment of silence, speeches from city officials and a drum song to honour the fallen medics.

“We’ve been working on getting ready for this ceremony for the last few months on the honour guard,” said primary care paramedic Molly Ridenour.

“We put a lot of time and work into today and it’s something that is very meaningful to a lot of us in remembering, you know, all those fallen medics cause, you know, we go out there every day and you really never know what you’re going to get.”

“So being able to remember them and put time and work into creating something beautiful and meaningful is really important to all of us,” she adds.

The ceremony also recognized those members who have lost their battle to mental health or struggle with Post Traumatic Stress Disorder (PTSD).

“I don’t think we could track the numbers that have lost their lives as a result of PTSD and suicide,” said Kirk.

“It’s definitely a concern and I think it’s something that is a huge focus for EMS these days, programs have been put in place, but at the end of the day we’re still going to fall victim to PTSD.”

“It’s hard because I’m sure there are a lot of people that we haven’t mentioned that have lost their lives in regards to, you know, their mental health and I think that’s a really big topic that’s becoming more prevalent in the new age,” added Ridenour.

Paramedics at Sunday’s ceremony say it was a big honour to have the bell in the city and to be apart of such an important and special ceremony.

Although it did bring to focus some of the dangers these men and women face, both Kirk and Ridenour say they wouldn’t have it any other way.

“I fell into this career by accident,” said Kirk.

“I have to say it’s probably the most rewarding thing I could have asked for in my life. It’s day to day contact with patients, you know, simple feats which may seem miniscule at the time, they all tend to build up.”

“We’re really like a big family and when things are tough, you know, these people really are there for you,” said Ridenour.

“At the end of the day, this is a group of people that are going to have your back.”