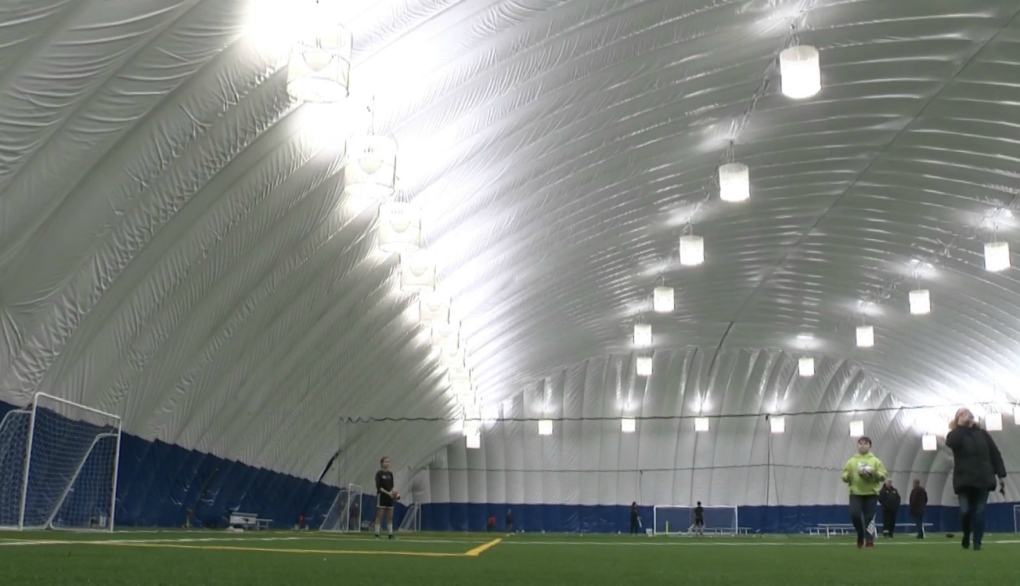 Officials with the Rainbow District School Board said the outdoor sports dome is now fully funded by the board, after the planned donation did not come through. It's located beside Lasalle Secondary School in New Sudbury. (File)

SUDBURY -- A new 60,000-square-foot indoor facility recently built in Sudbury has run into a funding issue.

The Fabio Belli Foundation made a pledge that it would donate $1 million to the $4.3 million multi-sport dome, but was unable to do so.

“We went the corporate route, we tried to talk to businesses and we did,” said Dino Moretta, co-chair of the Fabio Belli Foundation. "We talked to businesses that had the capacity to contribute and we were building those relationships but nothing ever materialized from a corporate perspective."

Moretta said COVID played a big role in not being able to come up with the money, after many of the foundation's fundraising events were cancelled.

“We had a big fundraiser planned in May at the Caruso Club," he said. "It was to bring together different not-for-profits especially the ones using the facility so they could talk about what it meant to them. That was going to be kind of our start and hopefully we could go on from there.”

He said the $1 million had to be raised by a certain date, which was not easy to do during difficult times.

“Given the timing and given the needs of the board, there was a deadline and we couldn’t meet that deadline," Moretta said. "We abandoned those fundraising efforts and they relieved us of the million dollars.”

Even though the foundation did not receive the total amount pledged, it did receive some donations totally less than $15,000.

“We got very few donations, some of those were used to fund our expenses," Moretta said. "We are a not-for-profit. We have no overhead. We had no employees or anything like that. The rest we do have. It’s there, we have reached out to those donors and they’re happy with making sure that’s used to further the mandate of the Fabio Belli Foundation.”

Officials with the Rainbow District School Board said the outdoor sports dome is now fully funded by the board, after the planned donation did not come through. It's located beside Lasalle Secondary School in New Sudbury.

“We had some conditions that we had to meet in terms of our financial obligations and financial reporting so we had to make those hard decisions,” said director Norm Blaseg. “It’s not something we were hoping for. We were hoping to arrive at a situation where we had a shared partnership, but that wasn’t able to happen and we are happy to take on the role as sole owners.”

The bubble had long been a dream of the Fabio Belli Foundation, named for the late city councillor and soccer advocate. Now with the school fully funding it, that name may be changing.

“Being the sole proprietor now, we will look at the naming options and it will probably reflect the Lasalle environment and all that’s something we look forward to completing over the next little while,” said Blaseg.”

Moretta said it would be nice if the board kept Fabio Belli’s name for the facility, but they understand if they don’t.

“Of course we want it to be named the ‘Fabio Belli Sports Dome’ and to us it will always be that," he said. "The fact that there is a plaque there, they recognize what his vision and what our contribution to building the dome. We know we were a big part of it, and we know Fabio was.

“We also understand that they built it, they financed it, and they are going to operate it, so it is what it is and we are accepting of what they decide.”

Still plan to be active

Members with the foundation say they are still planning to work with the school board by helping get people inside the bubble to participate and be active.

“That’s our mandate at the end of the day,” said Jean-Gilles Larocque, co-chair of the foundation. “We’re able to get several groups into the facility and help with scheduling. I don’t want to take away from their schedule, but we’re able to get everyone on the same page let’s just say for bookings and times and so forth, and that’s kind of the role I’m assuming we are going to keep with the community and just keep pushing kids to get in there.”

The Rainbow District School board says the dome will be open to students as of Sept. 8, but right now the sports dome is still closed to the public due to COVID-19.