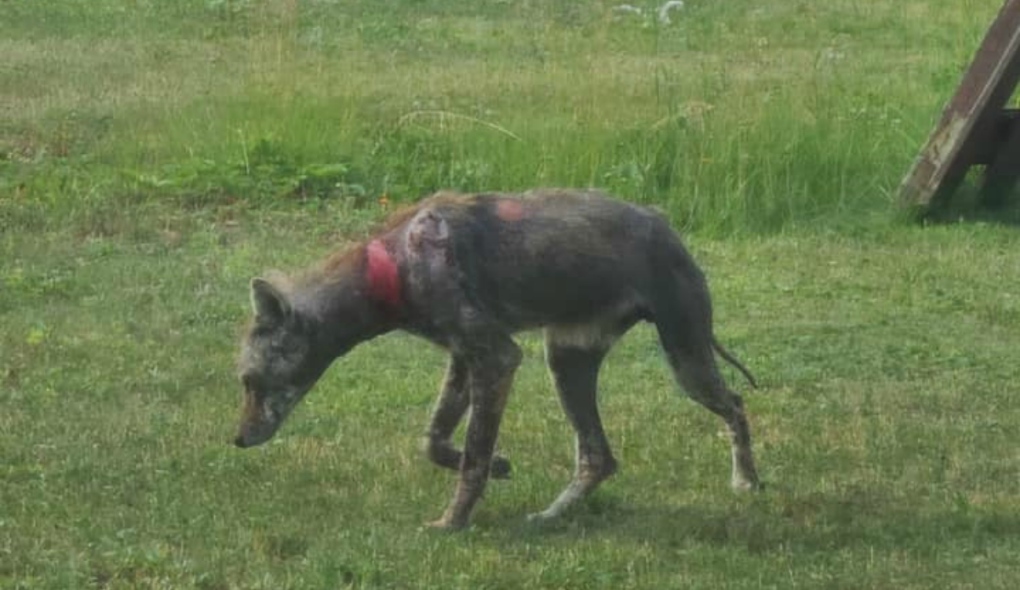 Residents in Elliot Lake are concerned about this coyote who has mange and is roaming the streets. (Supplied)

SUDBURY -- Residents in Elliot Lake are concerned about a coyote with mange roaming the streets.

Seeing wildlife is not uncommon in northern Ontario, but pictures of a skinny coyote that appears to have mange have been circulating on social media for some time.

Angela Dolbec captured a picture of the animal on Hirshhorn Avenue on July 4.

"We post pictures to ensure people know where he is, to keep kids and pets safe," said Dolbec. "Hopefully someone helps him out."

She said the coyote is in rough shape and roams around all parts of the city.

Amanda Wilson said the animal has been around for a few weeks, but she just noticed wounds on its neck.

"Bylaw said they can't do anything and no answer at MNR," said Wilson in a Facebook post.

Jolanta Kowalski is the senior media relations officer for the Ontario Ministry of Natural Resources and Forestry.

She said the MNRF has not received any calls about the animal, but based on the photos it looks like it has mange.

Don't try to feed it

"Mange is caused by mites and results in substantial hair loss and can be transmitted to humans and pets through direct contact," said Kowlaski. "Mange manifests in an itchy, red rash. It seldom results in significant health concerns and cannot be transmitted from human to human."

She said people should not approach the wild animal or attempt to feed it.

The MNRF does not provide direct wildlife control. Municipalities are responsible for human-wildlife encounters that create ongoing conflict. If an animal is posing a public safety threat, residents should call local police.

If you encounter an aggressive animal:

• do not turn your back or run from a wild animal

• back away from the animal while remaining calm

• stand tall, wave your hands, and make lots of noise

• carry a flashlight at night.

More information can be found on the MNRF's website.