The Ford government announced on May 14 that dog parks and dog grooming facilities could reopen with stage 1 of Ontario's plan to restart the economy.

In Sudbury, the city didn't unlock its facilities until May 23, but now dog owners have a chance to finally let their pets run free and burn off some pent-up energy.

"My dog is hyperactive and she's deaf, so we go on walks, but honestly they don't do it," said Brittinei Mapletoft who took advantage of the parks reopening.

"She has to be playing fetch, she's very social, and with us, I just had a baby, we just needed to get out of the house. This is a safe environment we can do that in and everyone is happy."

A handful of owners had the same idea with many at the Minnow Lake Dog Park on its reopening day. 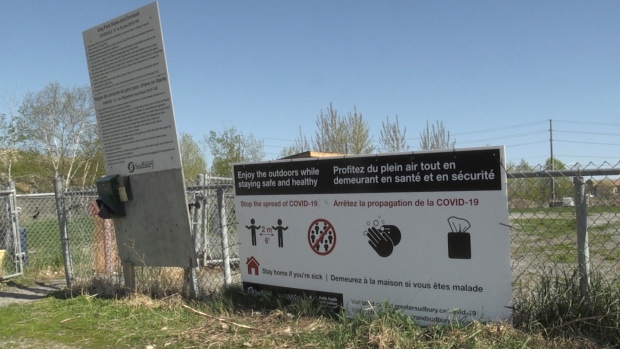 The Ford Government announced on May 14 that dog parks and dog grooming facilities could reopen with stage 1 of Ontario's plan to restart the economy. May 23/2020 (CTV News Northern Ontario)

Owners were careful to keep the recommended two-metre distance and some even wore cloth masks.

Meanwhile, the dogs took advantage of the open space and seeing their friends again.

"Since we brought him, Otto's been really really happy," said Laura Labine.

"You mention dog park and he looks at you and starts whining until we get here. But I'm really happy. He needs exercise."

Although there was no doubt that the dogs were happy about the reopening, the owners were happy to have a place to go outside of their house.

"I'm thrilled. I got her as a form of therapy for me. So that I could get out and walk," said Michelle Diotte.

"I live in an apartment building, and it's right downtown. There is nowhere to take your animals, so this is a blessing. It's a blessing."

Diotte says the COVID-19 restrictions were a challenge for her pup.

"We didn't get out very much that's for sure. It effected for a great deal. She was very antsy in the apartment and always crying and wanted to go outside."

However, the reopening of dog parks is not the only amenity that owners are celebrating with pet grooming facilities have reopening as well after being closed for two months.

Laura Cifaldi, the owner of Diamond in the Ruff Pet Grooming, says she's seen an influx of customers since she got the green-light to reopen and it is a service that dogs really missed. 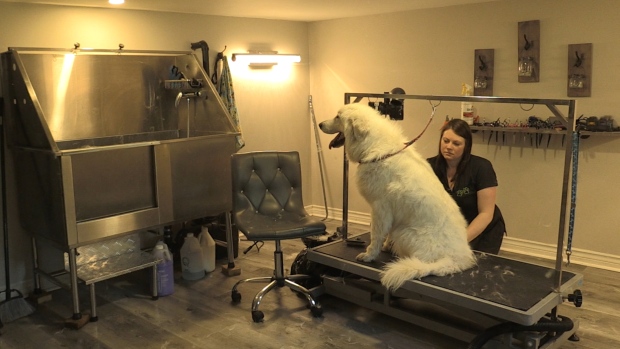 (Laura Cifaldi, the owner of Diamond in the Ruff Pet Grooming, says she's seen an influx of customers since she got the green-light to reopen and it is a service that dogs really missed. May 23/2020 Alana Pickrell/CTV News Northern Ontario)

"Every dog that's coming in has been in really bad shape. Owners have been trying their best to keep up with dogs as good as they can, but dogs need a little bit of extra stuff."

She adds that although owners are doing their best, it's hard without the special equipment that dog groomers have available.

"Dogs are getting matted. They're uncomfortable. It's hard for them to move their arms because the hair is all matted underneath their arm pits. It's hard because they're used to being maintained," said Cifaldi.

Typically dogs will see a groomer on a six to 8-week schedule.

"I can tell you, dogs that have been coming here, they're so happy. They come in and jump right in the tub like 'oh my god, get me cleaned up.'"

Even with restrictions starting to lift, physically distancing rules are still in effect and gatherings are limited to groups of no more than five.

The Minnow Lake Dog Park and Azilda Dog Park are open from 6 a.m. to 11 p.m. daily and will be monitored by the city.