Doe rescued after falling through ice on a northern Ontario lake 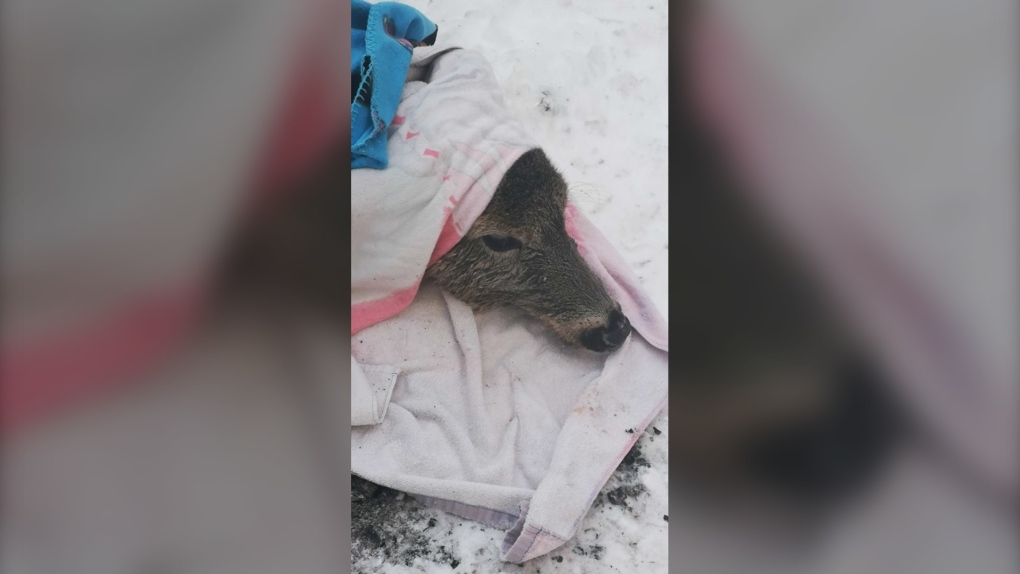 Doe after being rescued from Echo Lake December 10, 2019. (Andrea Joan)

SUDBURY -- It was a close call for a doe earlier this week after it fell through the ice on a northern Ontario lake.

Doug Behrens was driving back to Echo Lake, east of Sault Ste. Marie, on Tuesday when a friend stopped him on the road to tell him about the doe trapped in the lake.

Behrens said the water had only frozen over the previous night and was -22° C that morning, well below the seasonal temperature for this time of year.

Behrens raced to his friend Otto Meincke's house nearby because he knew he had a boat and some rope.

When they got to lake, several others were already gathered there wanting to help get the doe out of the water.

Meincke and another man, Mike Siemers, used a flat-bottomed boat to reach the doe, but had to break the ice to get to her. 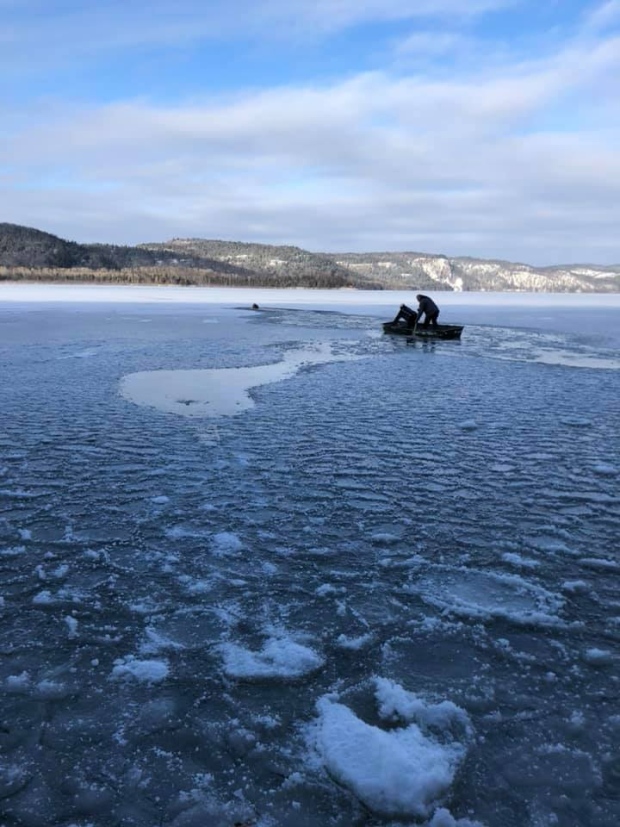 (Otto Meinke and Mike Siemers row out to doe that fell through ice on Echo Lake December 10, 2019. Doug Behrens)

Andrea Joan tells CTV News that she was driving by when she noticed a bunch of people standing at the edge of the lake, so she stopped to make sure everyone was okay and to see if she could help.

Siemers says they called the local Ministry of Natural Resources and Forestry (MNRF) office number and got a message saying they would get back to them in one business day. Then they called the OPP.

"The OPP contacted the MNRF TIPS Line indicating a deer in distress. The TIPS line contacted the MNRF Blind River field office. A supervisor sent an MNRF technician to the scene, but when he arrived the deer and members of the public were gone. Neither the MNRF office in Sault Ste. Marie or Blind River, nor the TIPS line received any calls from the public or media regarding this deer."

Luckily for the doe, people sprang into action to get her out.

The men in the boat carefully rowed out to the struggling animal, managed to get a rope around her, and pulled it to shore. 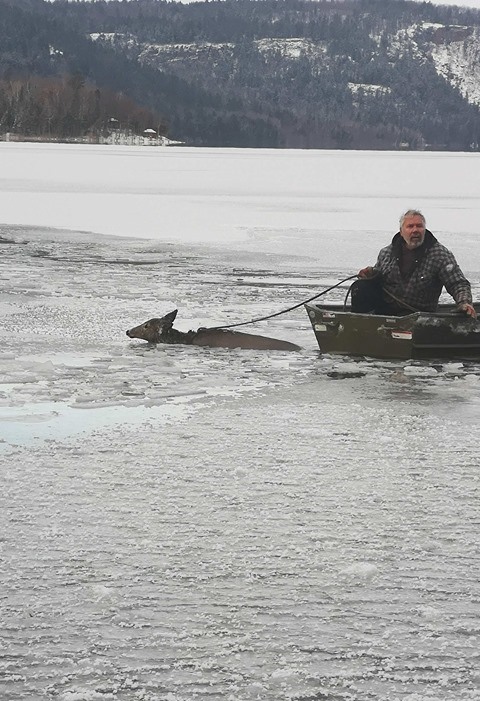 Kramer says the rescue took at least an hour.

Behrens says the animal was noticeably exhausted when it was pulled from the icy water and wasn't kicking or resisting. 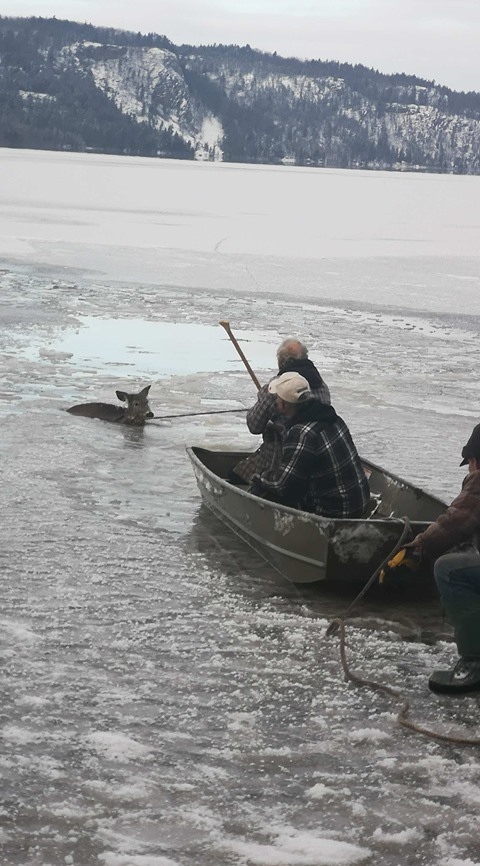 Those waiting on shore brought towels and blankets to dry the doe off and warm her up.

"She was shivering, but just laid there. I think she knew she was being helped," said Joan. "She let us pet her and rub her and even put a heating blanket on her to help warm her up, poor thing. She had glorious long eye lashes."

Behrens said it took about a half an hour to revive the doe and that she didn't make any sound, but just stared at her rescuers. 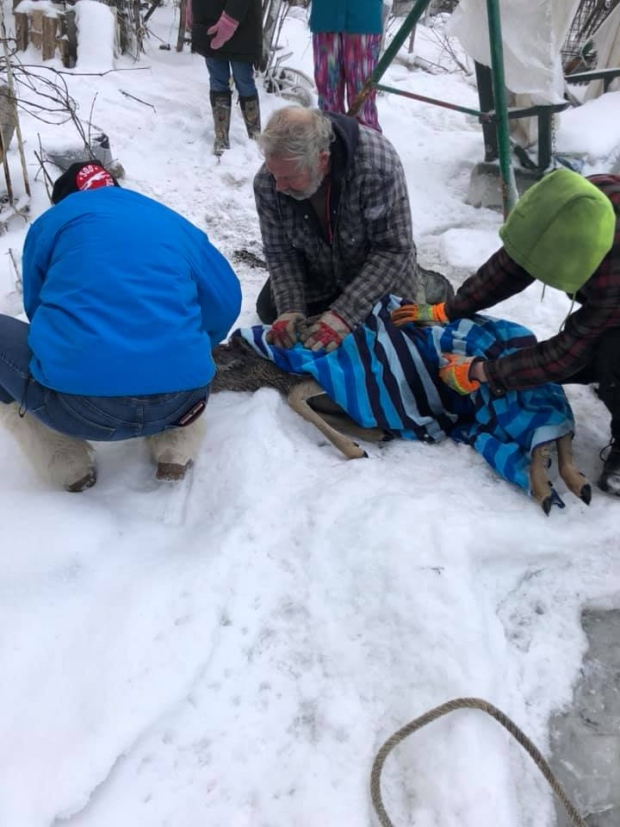 "Some people try to say they should be left alone, but we couldn't sit there and watch it drown. I wanted to jump in the lake. Poor little thing," said Joan.

Behrens said it was nice to see that everyone came together so quickly with no hesitation and just did what needed to be done. He said it is hard to see an animal in distress, even though some in the group hunt.

He said next time, and living in northern Ontario he thinks there will be a next time, he would like to be better prepared with an axe and an ice chisel.

After about 45 minutes of being attended to, the doe finally got up, and sprinted off into the bush.

Everyone made sure she didn't head back towards the lake.

While it was a happy ending for the doe, Siemers said that after the adrenaline rush stopped, he realized it was 10 years to the day that he lost his brother-in-law after his snow machine went through the ice on a different lake.

Statement from MNRF added. Mike Siemers clarified the information on the call to MNRF.