TIMMINS -- Residents in Timmins are concerned for the well-being of an apparently diseased fox spotted roaming around the Timmins area.

One resident, Shannon McCord, said she encountered a sickly-looking fox on an early January night near Murray Street and Brousseau Avenue. She said it appeared to be infected with mange.

“The animal approached me ... he was rubbing his chin on the ground, looking like he was itchy,” said McCord, who was taking a friend sightseeing that night. “I opened my window, we were about three feet from each other, and he was just staring at me, tilting his head.”

Reports claim the fox could be infected with mange, a skin disease caused by mites that results in hair loss and rashes.

McCord believed the fox she saw had that disease saying, “His eyes were almost swollen shut and the hair looks extremely matted.”

The Ministry of Natural Resources and Forestry (MNRF) said based on photos shared by the public, the fox does appear to have mange.

“There is the chance of transmission to humans or pets, so we recommend that you stay away from the animal and keep your pets on a leash,” said Karen Passmore, the ministry’s local outreach specialist.

Passmore noted that the MNRF does not respond to issues involving sick or injured animals, saying that any concerns for public safety should be directed to police. 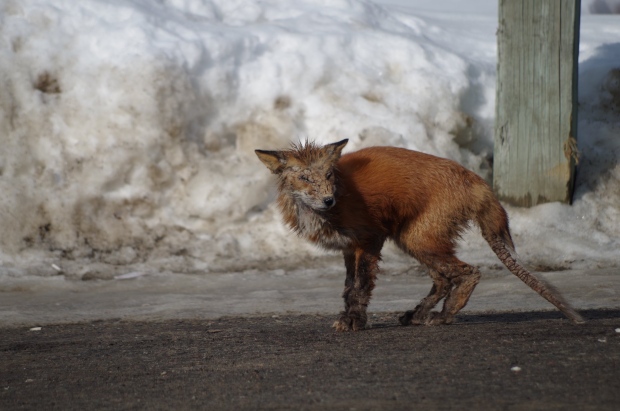 The Turtle Pond Wildlife Centre told CTV News that it’s open to taking custody of the fox if it can be captured and transported to its location in Val Caron, a community in Greater Sudbury.

Its founder, Gloria Morissette, is licensed to care for a variety of animals. While she mainly cares for turtles, Morissette said the low number of animal rehabilitation centres in northern Ontario often requires her to step up in these cases.

“The mange itself is easily treatable,” she said. “It’s the secondary issues that we would be worried about with this individual fellow, because he’s had the mange for so long.”

The treatment would last at least six weeks, Morissette said, consisting of medication to kill the mites causing the infection, plus pain killers to keep the fox calm as they die off.

Once the infection is clear, the animal would need time to heal its damaged skin and recover its fur, after which it would be brought back to its home territory, as per MNRF’s requirements.

As of yet, the fox hasn’t been captured. If residents spot it or any wild animal posing a danger to the public, they should contact police.

“Somebody needs to do something about this fox,” said McCord. “It really needs help ... it looks like he’s in a lot of pain.”