SUDBURY -- Malia Leighton is preparing to graduate from high school on Manitoulin Island and while she says it's not what she hoped for, she’s making the best of it.

"Obviously it’s like really sad," Leighton said. "Those … memories and everything like that … you won’t have, but I mean I still bought a prom dress to get pictures in."

CTV Northern Ontario is honouring Class of 2021 graduates with a special photo album. Submit your grad and prom photos here.

While Premier Doug Ford has been saying there should be in-person grad ceremonies with appropriate COVID-19 precautions, many school boards are saying they can’t organize it in time.

Rainbow District School Board said in a statement that outdoor graduation ceremonies "would contravene the safe reopening guidelines."

"We know how important graduations are for students and families," the statement said. "Health and safety, however, is equally as important and remains our first and foremost priority."

"Given the ongoing focus on health and safety, the planning that has already occurred and the costs that have been incurred, virtual graduations will continue at all Rainbow Schools."

The Sudbury Catholic District School Board sent a similar message to its parents and students:

"Our principals and staff began planning some time ago to prepare wonderful celebrations to honour the hard work and accomplishments of students in grades 6, 8 and 12," the statement said.

"Schools will also be augmenting the virtual celebrations with outdoor opportunities where possible. These might include drive by and photo opportunities, pick up of certificates and awards/gifts and the chance to greet staff at the school."

Malia’s mother, Terri-Lynn Leighton, said the fact her daughter is missing her in-person graduation is disappointing, and it’s not the recognition that students deserve.

"It’s not special," she said. "You have your child sitting at home and going to be watching a computer screen they just spent the past almost two years watching. Their life has been a computer screen and it’s certainly not fair at all.”

Terri-Lynn is in the process of planning something for graduates on Manitoulin Island, but she’s not sure what that will look like at this point in time.

"I’ve went through many hoops and I just kinda keep getting turned down," she said. "On my own, I’ve reached out to a company to order caps and gowns because our students are probably one of the few that actually didn’t even get a graduation photo, which is very, very upsetting. It's four years of their education and they have nothing to show for it.”

She said there's a council meeting June 13 in Gore Bay when officials will decide if graduates will be allowed to have a socially distant gathering at the town docks so they can get photos. 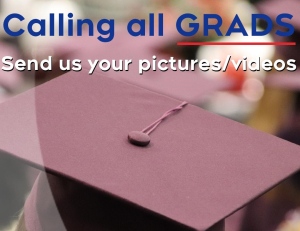