Did she ever see Hitler? Was she scared? Holocaust survivor shares common questions from students

SUDBURY -- The unimaginable horror of the Holocaust -- and the need to ensure it never happens again -- is one of the reasons survivors share their stories with young people.

It's why survivor Eva Olsson has travelled across Canada over the years, speaking to thousands of students.

Olsson, 96, now lives in Bracebridge, Ont., and was touring the country right up until the start of the COVID-19 pandemic.

Her family was taken to Auschwitz-Birkenau, where she and her sister were separated from the rest of their family. It would be the last time she ever saw many of her loved ones.

"We were there for about three or four months before they shipped about 2,000 young females to Germany to work and that was a good thing because it was better than to be at Auschwitz where it was very difficult -- the gas chambers, the chimneys," she told CTV News.

Olsson said it was a scary time for her and her sister, who were living in barracks until the Allies started their bombing campaign and the barracks were destroyed.

She remembers it all like it was yesterday. She spent much of International Holocaust Remembrance Day this week speaking to students through Zoom.

"I've evolved and travelled across Canada; I've spoken between approximately 3,900 and 4,000 times, so it's there," she smiled as she pointed to both her head and her heart.

Under normal circumstances -- without COVID-19 -- she said she'll go where her calling takes her and travels frequently.

"I'll never get tired of it," Olsson said. "I'll get up at 6 o'clock in the morning and my son would drive me to the airport. I've flown to Alberta many times, I've flown to the Arctic -- wherever the calling is ... I go."

The years have been very kind to Olsson who hasn't lost a step and has a sense of humour when she speaks to young people.

One young person asked her if she had ever seen Adolf Hitler.

"You know what my response was? I only look at good-looking men and he was ugly," she laughed. "Oh, was he ever ugly, inside and out, but those are some of the questions you get."

Another question she commonly gets is was she scared? Her answer? Yes.

"Very much so, a day was an eternity," Olsson said. "Also because in the first couple of days you didn't know about the gas chamber, but once you knew that you were in the same barracks, there were prisoners that had been there from Czechoslovakia, Austria and Poland since 1942, so they knew what was going on.

"I remember asking one, 'When are we going to see our family?' She said, 'Are you crazy? You're never going to see your mother and father' and pointed to the chimneys."

Olsson said she speaks to keep the memory of those who died alive and to ensure history never repeats itself.

"Remember and never forget, if we forget or deny history it will repeat itself ... it's for your children. We have a responsibility to your children," she said.

Olsson cried for a long time after the Holocaust and for many years, she stayed quiet about what she witnessed.

She finally broke her silence when Monck Public School in Bracebridge asked to speak to her granddaughter's class about the Holocaust. Olsson decided to continue telling her story. 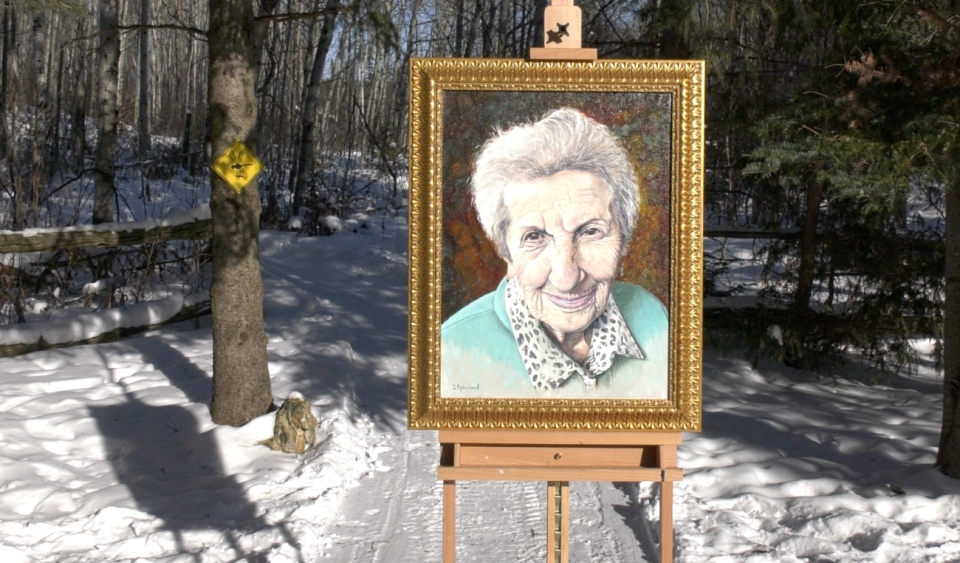 "Her story is one that has to be heard, it's one of resilience and hope for this generation," Robichaud said. "Just the fact what this woman went through and the fact that she can still hope for the future ... to me it's a story of forgiveness."

Normally, Robichaud sticks to landscapes but he said with this passion project, it was important to get every line, crease and look right for a woman who has lived history.

It's in that spirit that Robichaud is hoping she'll like the picture.

Olsson said she was truly shocked and surprised to hear what he had done and is looking forward to seeing it once the pandemic allows.

Robichaud hopes to present the painting to her through physical distancing at some point in the near future.