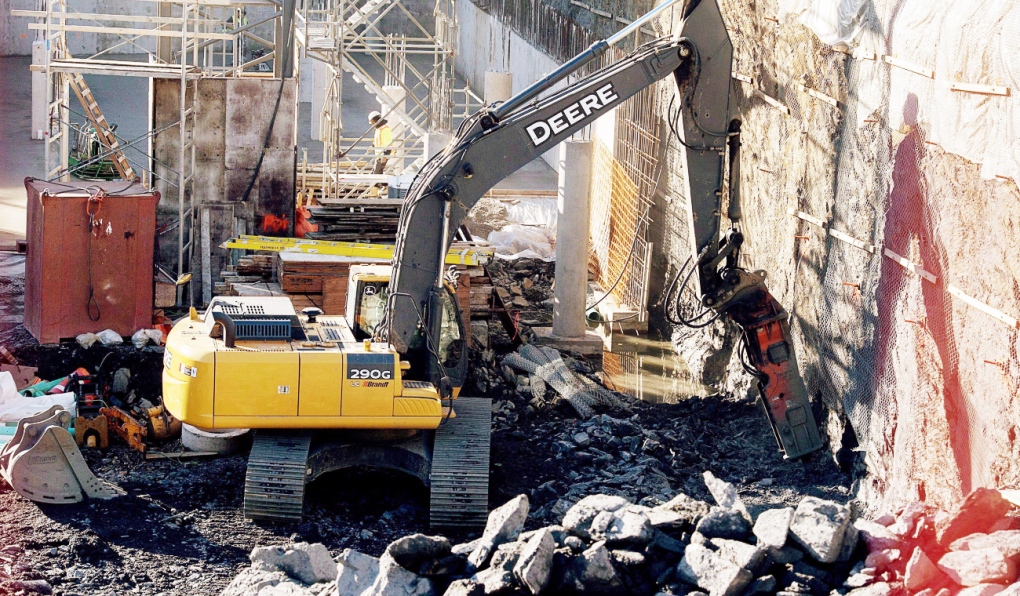 The Timmins Construction Association is alerting the Ontario government about a chronic problem that is causing major construction delays. (File)

The Timmins Construction Association is alerting the Ontario government about a chronic problem that is causing major construction delays.

Under Ontario law, individuals and construction companies must take steps to ensure no underground infrastructure will be affected by their construction project.

Better known as 'dial before you dig,' it's illegal to begin digging for most construction projects until it has been determined there are no electrical, telephone, water or other underground infrastructure that could be damaged.

A request is made to Ontario One Call, which informs the utility or company. In turn, the utility sends out a locater who paints or puts flags on the areas where the infrastructure is situated.

The process is supposed to take a few days, but Jamie Clarke, president of the 100-member Timmins Construction Association, said the process can now take months.

"We are writing to inform you of one of the largest barriers to new and existing infrastructure expansions and builds in northern Ontario," Clarke said in an open letter to Kaleed Rasheed, Ontario's Minister for Public and Business Service Delivery.

"Any and all excavating of a new building, repairing buried infrastructure, landscaping, residential paving, building concrete slabs, or anything else that requires you to break ground, you must contact Ontario One Call at a minimum of five days prior to your excavation."

However, builders who submit a request in Timmins are waiting as long as three months, Clarke said.

It's an added delay – and cost – to builders at a time when supply chain problems generally are pushing up costs, he said.

"Minister, northern Ontario has a very narrow window of opportunity to complete critical infrastructure projects," Clarke said in his letter.

"The massive financial burden these delays bring to our firms can heavily impact the outcome of the project and our community's ability to encourage new investment in the future."

Ian Simpson, spokesperson for Ontario One Call, told CTV News that above all, it is key for everyone to dial before they dig for a number of safety reasons.

"Whether it's planting a tree, putting in a pool or a major construction … they have to request a 'locate' by law," Simpson said.

"The only way to do that is to go through Ontario One Call."

One Call is the 'middle man' in the process, Simpson said. Their job is to inform the utility that they have received a request. The utility then sends someone out to clear the area, or mark the areas where there is infrastructure.

"Legally, they have to respond with a locate," Simpson said.

"It is them that comes out to someone's property or if it's a major project in order to put the locate markings on the ground."

While made worse by the COVID-19 pandemic, he said delays in fulfilling locate requests are nothing new. One of the challenges is the fact multiple utilities may have to do locates for the same project.

"If you have three utilities involved, you legally can't dig until all three of them respond with the locate," Simpson said.

"So even if two of your local utility companies get out there and do it within the legal time frame -- which is five business days to be complying with the law – you still can't legally dig."

The biggest challenge is usually staffing, he said, with utilities not having enough qualified people available to keep up with requests.

"Primarily, it would be a resource issue," Simpson said.

"If they don't have enough staff to go out with the demand of locate requests coming in, then they may fall behind and that's what could be creating these delays now."

In April, the province passed changes to the law aimed at streamlining the process and clearing some of the backlog. For example, Simpson said in the past, companies building in the same area couldn't share a locate request and had to issue them separately.

There are also plans to hire a lot more people to do the locates, but Simpson said there is significant training involved and it could take some time.

"We need really well-trained utility locators because … what they do really impacts the safety of Ontarians," he said.

A series of unusual leaks on two natural gas pipelines running from Russia under the Baltic Sea to Germany triggered concerns about possible sabotage Tuesday, overshadowing the inauguration of a long-awaited pipeline in Poland that will bring Norwegian gas to Europe in efforts to bolster energy independence from Moscow.

Hurricane Ian tore into western Cuba on Tuesday as a major hurricane, with nothing to stop it from intensifying into a catastrophic Category 4 hurricane before it hits Florida on Wednesday.

A graduated driver's licence program in Alberta that has been in effect for the past 19 years is getting an overhaul.

World chess champion Magnus Carlsen said on Monday he believed Hans Niemann had "cheated more - and more recently - than he has publicly admitted," adding he no longer wanted to play against the American and any rivals who repeatedly cheated in the past.