Zombies have taken over a quiet northern Ontario neighbourhood for the film adaptation of Zombie Town, a young adult novel by R.L Stine, featuring several big stage and screen actors.

The mega-blockbuster movie production is wrapping up in the Greater Sudbury community of Garson after four weeks of filming. It features zombies, actors from Kids in the Hall, Dan Aykroyd, Chevy Chase and Henry Czerny.

CTV News has an up close and behind-the-scenes look into the film Zombie Town, based on the popular 2012 book of the same name by the author of the popular Goosebumps series.

Together, comedic legends Aykroyd and Chase met with local media ahead of Thursday night's filming. Staying true to form, the pair had the crowd laughing at their playful banter. 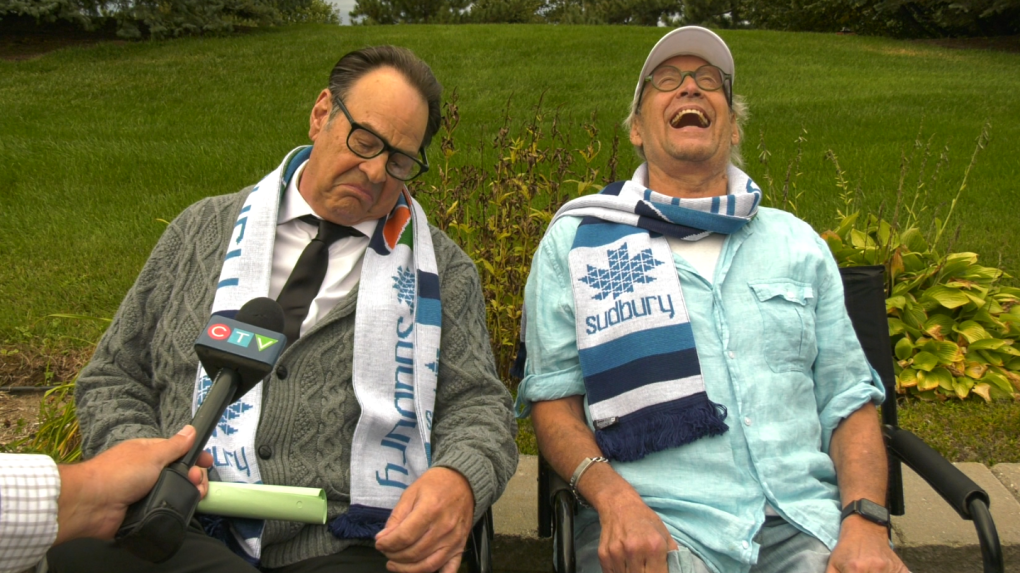 "You know, I'm just really happy to be here, the countryside is beautiful," Chase said.

"I love seeing this guy. Jeez, we've done so much together," Chase said.

"But it's been wonderful the four days. I wish I had been here for longer, but they kind of crammed all my stuff in and Chevy's into the last week," Aykroyd said.

The two have a friendship that pre-dates Saturday Night Live and the film was a chance for the dynamic duo to work together again.

"Well I've found when one mixes horror and comedy, one can have a hit," Aykroyd said.

"And so, well, of course, R.L. Stine stands on his own with his writing and material, so we're going to be true to the R.L. Stine ethos."

The film is also getting an assist from veteran Canadian actor of stage and screen Henry Czerny, who often plays the role of the villain. 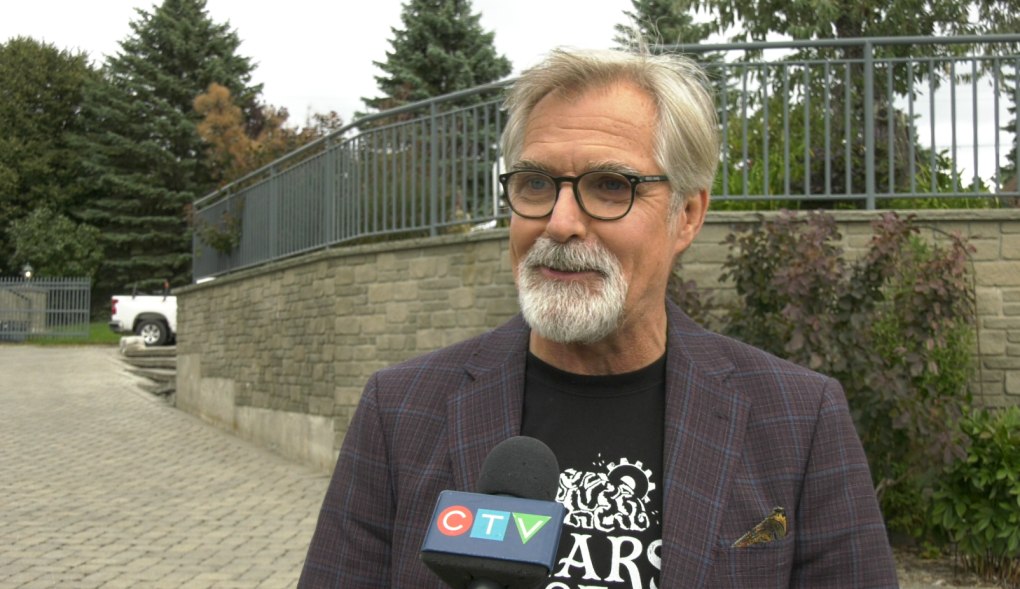 "It was working, the opportunity to work with Dan Aykroyd, who we all, anyone who has a sense of humour, would probably kneel to a little bit - he's royalty to me," Czerny said. 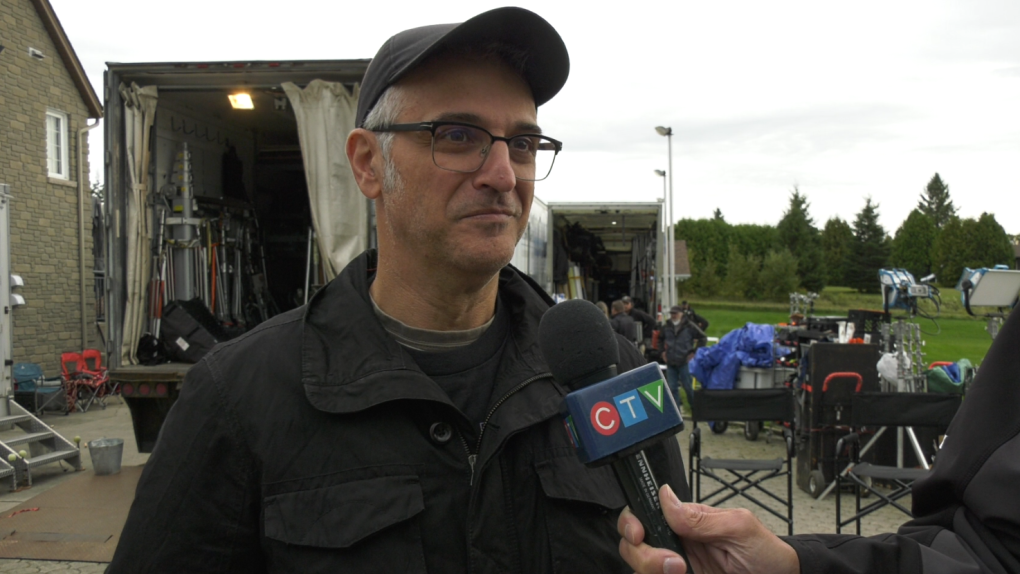 "I don't even wind them up, I just put them in their places and they go and I say 'action' and 'cut,' and I say 'do you guys want to do it again?' And they do it again," Lepeniotis said.

The mystery teen romance story centres on a quiet town that is upended when two young teens watch a horror movie and the zombies leap off the screen.

"It does follow the premise of the book -- which is the fun part about it -- but it does expand on it and I think it's as fun or even more fun and definitely scarier than the book for sure," said Yvonne Bernard, the owner of Lookout Entertainment and a producer for R.L. Stine who was on set for the movie. 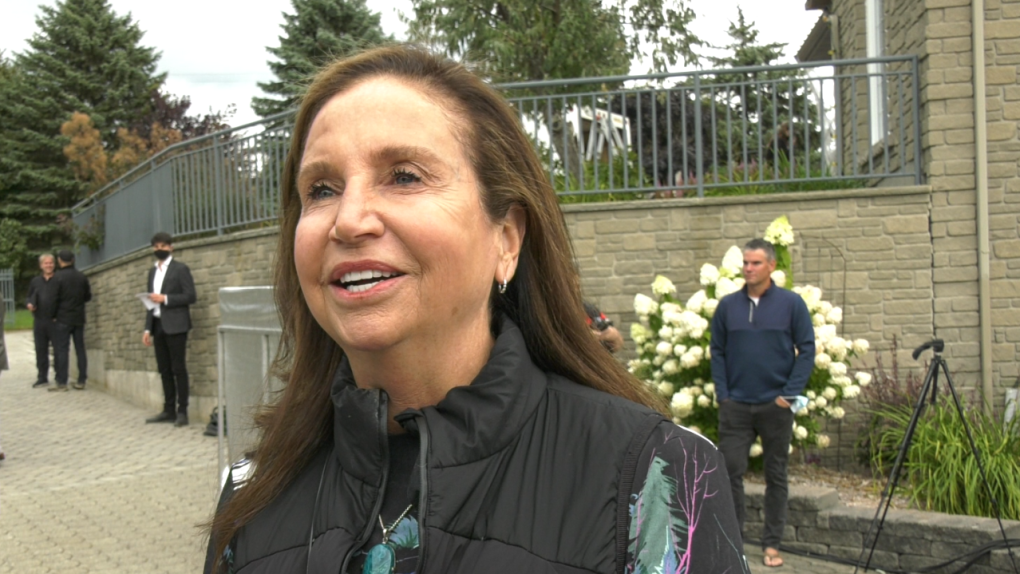 "Oh, I think they can expect something really, really scary. We've got a lot of zombies and it's also kind of funny. So, I think that it's great family entertainment, not just for kids. We wanted to create something that everybody wants to sit down and watch together. And I think Dan Aykroyd and Chevy Chase are going to do just the thing for the parents."

She said the people and crews in Sudbury have been great and the city gives a wholesome, hometown feel to the movie.

"People here are friendly, they're wonderful, they really appreciate having a film industry come up here and they just embrace the film industry. And as you can see, we've got movies, two, three of them shooting in town now and there are going to be much more," Aykroyd said.

"There's so many great looks in this town. You've got upscale neighbourhoods, down-scale neighbourhoods, you have a lot of really cool, dead technology and live technology. And of course, this is one of the great industrial towns with a vast hidden wealth you don't want to talk about. It's a very rich town."

Executive producer John Gillespie told CTV News in an interview this is not the first time he has been to Sudbury. 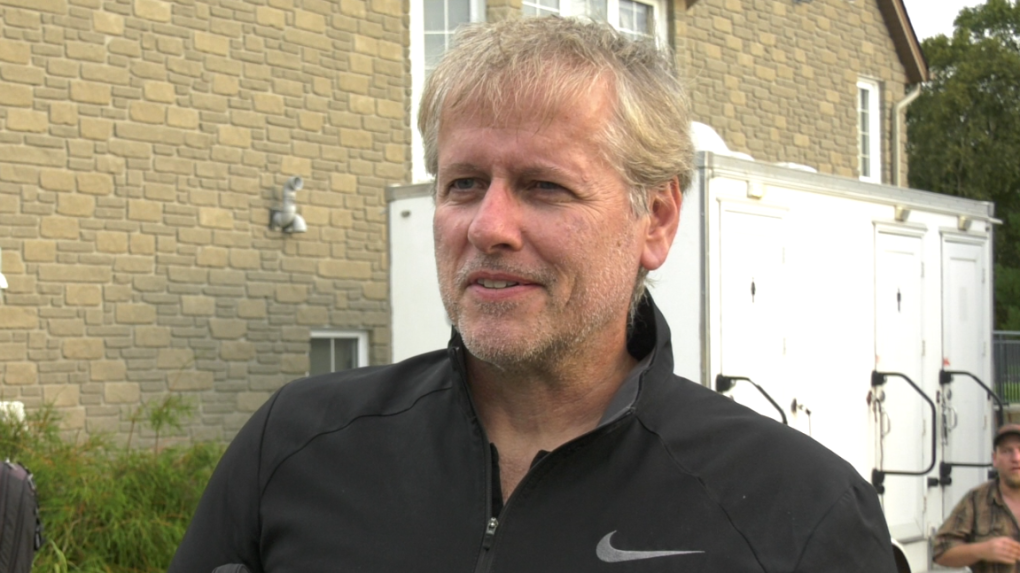 "This is my second movie here. We did a film six years ago, so I had nothing but the best experience. So happy to be back again, yeah," Gillespie said.

The film is just wrapping up production and audiences should expect to see the movie in theatres sometime early next year.

As nature talks unfold, here's what '30 by 30' conservation could mean in Canada

Prime Minister Justin Trudeau was unequivocal Wednesday when asked if Canada was going to meet its goal to protect one-quarter of all Canadian land and oceans by 2025. That goal, which would already mean protecting 1.2 million more square kilometres of land, is just the interim stop on the way to conserving 30 per cent by 2030.