TIMMINS -- Technology and the ability to work remotely has changed the way many people do business, including CTV News Northern Ontario.

In Timmins, Bell Media employees are making the transition to permanently work from home and this means a change for a well-known landmark.

It's had various names over the years, but many people in Timmins know the iconic building atop Pine Street North as the 'the tv station on the hill.'

"That was the pride and joy. The construction of that television station with the radio component was state of the art at the time," said Karen Bachmann, curator of the Timmins Museum:  National Exhibition Centre.

Countless live television programs, talk shows, and commercials were produced in the building for over forty years.

"Mr. Lavigne would always make a big production of handing us a two dollar bill in a pay envelope and to thank us for our service to the community," said Bachmann.

Many people also fondly remember driving up to the station to request a song on the radio during 'Hilltop Rendezvous.'

The building was constructed in the late fifties, by broadcasting pioneer and Timmins resident, Conrad Lavigne. 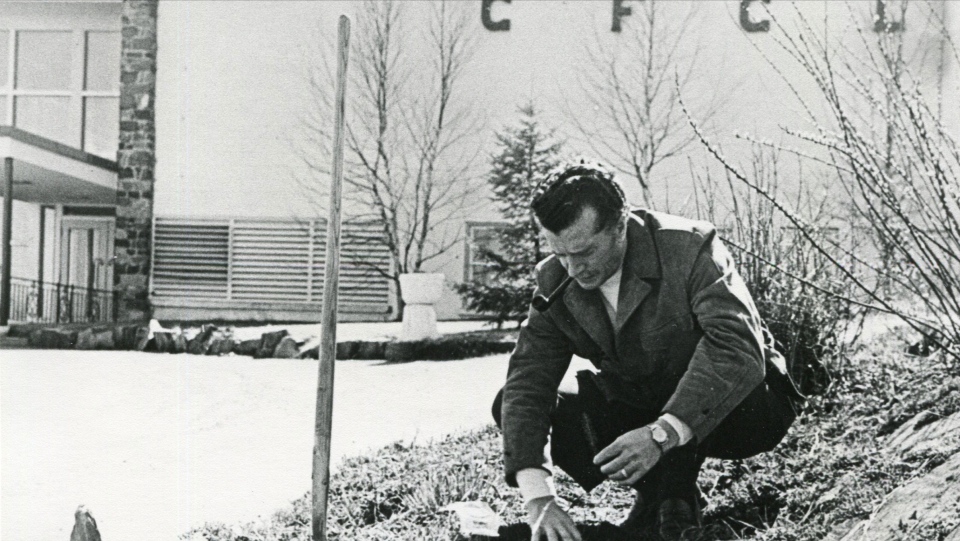 "Mr. Lavigne would always make a big production of handing us a two dollar bill in a pay envelope and to thank us for our service to the community," said Timmins Museum curator Karen Bachmann. (Supplied by Timmins Museum)

"We used to climb just to see the community, how far we could go up and see what was happening," said Laneville, who Lavigne first hired as a camera operator over fifty years ago.

To many, the building means so much more than its bricks and mortar.

"I started back here in 1988 in 8th grade," reflected Jason Laneville, a former camera operator who later became a sales manager.

"I started cutting the grass and looking after the property and I was on the payroll for over 30 years and it’s all about the people. The people that you work with," he said.

Pierre Renault has worked in the building for forty years.  He started as a news cameraman.

"It has exceeded my expectation. When I started I was fresh out of college, gung ho and wanted to do and learn as much as I could and I did.”

Renault continues to work for CTV and producers television commercials.  Now, he can do the work from home.

"When I finish my shift, I’m in my house already I don’t have to travel so that’s the thing I’m going to have to get used to. Other than that it’s the same work. We’re going to service our clients the same way. They won’t see a difference," he said.

Working out of the CFCL building is where my television news career began. Technology has changed a lot over my twenty-six years, allowing for more efficiency and flexibility to work from anywhere:  my home, my work vehicle, and in other surrounding communities to get more information out to viewers faster.

The heritage building will remain as it is at the top of Pine Street Norther, but will now be operated by a different division of Bell.