SUDBURY -- They were all smiles inside the Wikwemikong Nursing Home on Wednesday as its 59 residents became among the first in northeastern Ontario to get the COVID-19 vaccine.

"I had to stop and say, 'What? We're getting the vaccines? Cause I don't feel I heard you right?'" said administrator Cheryl Osawabine-Peltier. "Because I feel like it's the step there, the end is getting near."

Nurses from Public Health Sudbury and Districts arrived first thing in the morning and had both seniors and staff roll up their sleeves. There were some extra doses left over, so members of Community Living were also vaccinated.

Osawabine-Peltier was the first staff to get vaccinated, to help those encourage those who were a little nervous about the process.

"It feels like we're getting that much closer to it and it feels like all the residents deserve this and I was so happy that we were selected to get the vaccine," she told CTV News.

"We're ecstatic here and seeing some of the bright hopes of getting back to normal and not having COVID-19 here in the community," said Duke Peltier, Chief of Wikwemikong Unceded Territory. "We want to make sure that vaccines are done quickly and we're hoping every long-term care home and vulnerable populations receive them in a timely manner."

Peltier said the pandemic has been tough on everyone, including residents who have been shut inside the facility since March.

"The staff there have been pretty much in lockdown mode, even prior to the recommendations that came out by the province on March 9," he said. "They've had their staff in bubbles since then, they've been having very limited interaction within the community over the last 10 months, and the residents haven't been able to see their families unless it's through a picture window. So we're very happy with the two doses and that they can hopefully begin to have in-person visiting again." 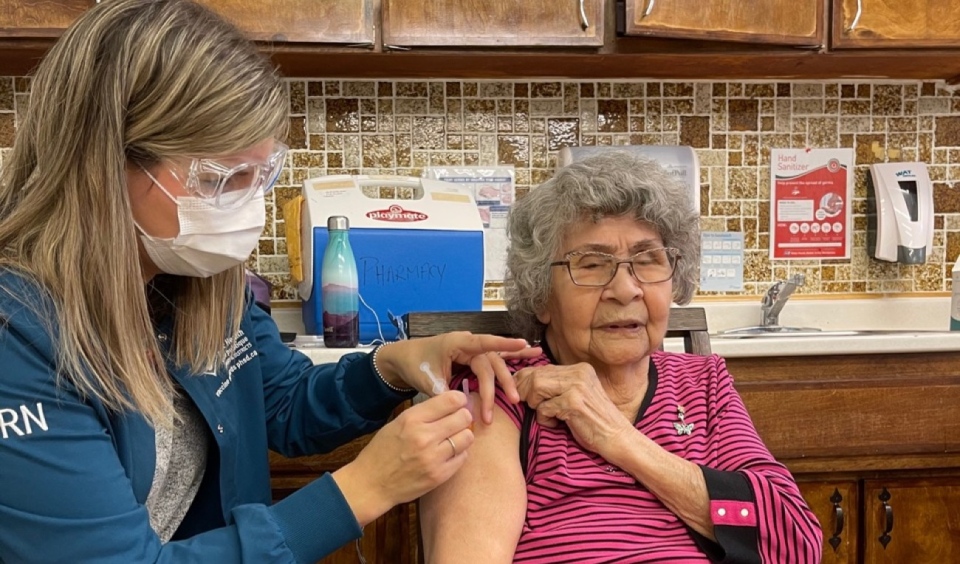 Jet Francis was among the first residents to get the vaccine. He's looking forward to life getting back to normal. He said the first thing on his to-do list will be heading out to the water to go fishing.

"You know, they're kind of scared about what it's going to be like, you know, to get the needle," he laughed. "I just tell them, 'you're going to use the small needle, right?'"

Public Health Sudbury and Districts will return within four weeks to give the seniors and staff a second dose of Moderna vaccine.

It's a first for the region and public health units are expecting more to arrive within the weeks to meet the province's goal of getting long-term residents their first dose by Feb. 15.

Several areas of northern Ontario will be given Moderna wherever it would be a long distance to travel. If there's a way to get Pfizer to those vaccination clinics, that's what they will do.

Two of the cities that will be getting the Pfizer vaccine because they have the equipment to handle it will be Sudbury and Thunder Bay.

They're currently in Phase 1 of trying to get to the province's most vulnerable population. They're hoping to start Phase 2 at some point in either late March or early April, expanding vaccines to an additional roughly 10 million people.

McNair said it's important to remember this will likely take several months before they reach everyone.

"Vaccine delivery is being announced by the province, so we will know when we get more," she said. "We're waiting for additional information."

Sudbury MPP Jamie West and his northern Ontario NDP caucus colleagues had released an open letter earlier this week calling for the rollout plan to be made public by the province.

He said Wednesday's news is positive and is hopeful this is just the start.

"We're getting a lot of calls to our offices, people wanting to know about the vaccines and when they're coming out," said West. "It's been frustrating for people and it's not that they're not willing to wait their turn, they want to know when it's coming or at least a ballpark."

West said people just want to know how this is going to work.

"Also on the call that I had with Dr. Sutcliffe (Sudbury's medical officer of health) from Public Health, is that they're estimating Jan. 25 is when they'll start seeing vaccinations here, which I think becomes a relief for people to know sort of that they are arriving and there is a plan in place," he said.

Ontario officials say they are hoping to be able to shift to Phase 2 priority individuals as soon as the vaccine supply from the federal government allows.

Public Health Sudbury and Districts is hoping to release its playbook on what they're expecting and how it might work within the coming week.