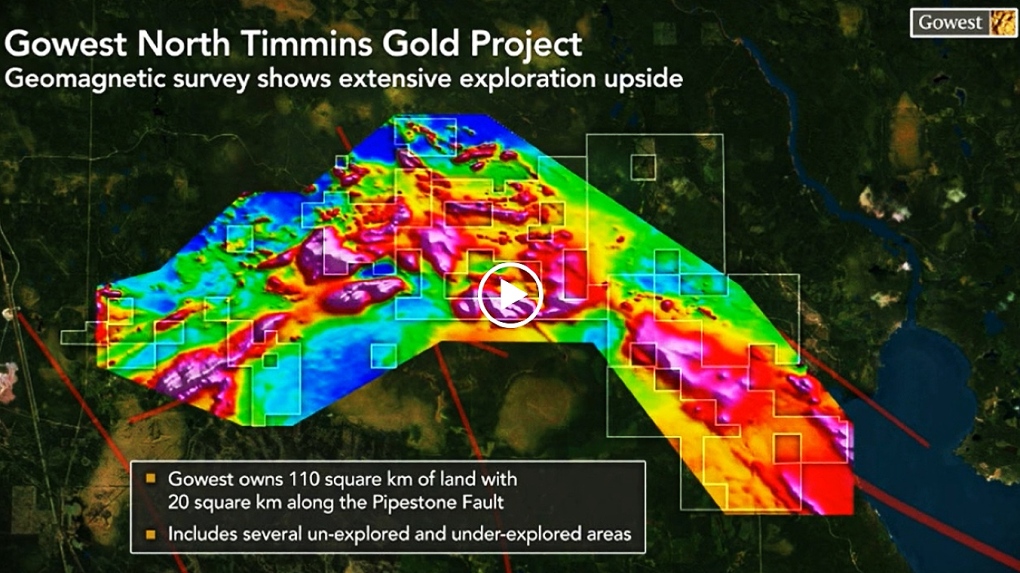 Gowest Gold Ltd. in Timmins announced Monday it is being sued by North Bay-based Cementation Canada Inc. for $7.4 million. (Supplied)

Gowest Gold Ltd. in Timmins announced Monday it is being sued by North Bay-based Cementation Canada Inc. for $7.4 million.

Based in North Bay, Cementation is "seeking payment in the amount of approximately $7.4 million in respect of certain services and materials provided to the company under a contract between the parties dated as of March 2, 2017," said the post on Gowest's website.

"Cementation has further caused a lien to be registered on title to the company’s Bradshaw gold deposit. The statement of claim also names Greenwater Investment Hong Kong Ltd., the company’s largest shareholder and secured creditor, as a defendant in the action."

Officials with Gowest are evaluating the merits of the claim, the post said, as well as "its defence and other potential options available to it in response to the action."

The company is working to develop its Bradshaw gold deposit north of Timmins. In March of this year, Greenwater announced it was providing $19 million for the effort to restart the gold mine.

The impact of the statement of claim is still being evaluated, Gowest said.

"The Company remains in discussions with Greenwater with respect to the closing of its proposed additional equity investment in the company, including the impact that the Cementation action may have on this proposed investment," the statement said.

"The company remains committed to moving forward with its efforts to restart mining activities at Bradshaw and intends to continue its activities in this regard."

Gowest is exploring additional gold targets on its more than 100‐square‐kilometre holdings and continues to evaluate the area, which is part of the Timmins gold camp.

The night before the federal government invoked the Emergencies Act in response to the 'Freedom Convoy' protests, the prime minister’s national security adviser told him there was 'a potential for a breakthrough' in Ottawa, court documents show.

After a series of interest rate hikes implemented by the Bank of Canada, housing markets are now facing a 'significant' correction. CTVNews.ca spoke to Canadians who are now struggling to make the goal of purchasing a home, or selling one, a reality.

A new virus was found in China, here's what we know

Scientists are keeping an eye on the Langya virus, a new pathogen that appears to have been transmitted from animals to humans in China and causes symptoms similar to COVID-19 or the flu.

A high-ranking B.C. officer used police resources to conduct at least 92 searches on his ex-girlfriend and her family while stalking her over a period of five years, according to documents exclusively obtained by CTV News.

Power has been restored in Toronto's downtown core after a widespread outage caused major disruptions in the city Thursday.

A Brampton, Ont. media personality who was attacked with a machete and axe in his driveway will need months of physical rehabilitation to recover, a close friend says.

Man who tried to breach FBI office killed after standoff

An armed man clad in body armor who tried to breach the FBI's Cincinnati office on Thursday was shot and killed by police after he fled the scene and engaged in an hourslong standoff in a rural part of the state, the Ohio State Highway Patrol said.

It’s been seven days since 74-year-old Lois Chartrand went missing while mushroom picking in the forest north of Smeaton, Sask.