Time is running out to stop the proposed federal riding boundary changes in northern Ontario.

The Federal Electoral Boundaries Commission is proposing consolidating the 10 northern Ontario ridings into nine, based on the most recent census data.

Today is the deadline to register to speak at the public hearings to comment on the changes.

Residents can also comment on the proposal in writing by email or letter.

This proposal would mean northern Ontario would have one less representative in the House of Commons and an additional MP would be added in the Greater Toronto Area to give Ontario as a whole the same numbers of seats.

It recommends that Ontario's Far North become one electoral district called Kiiwetinnong-Mushkegowuk covering 520,307 kilometres, most of which does not have road access and its population would be composed of mostly Indigenous Peoples.

With that, the boundary lines of the other eight district in the northern region will be redrawn in the proposed redistribution plan. The proposal would see the elimination of the Algoma-Kapuskasing-Manitoulin riding with the communities being redistributed among three of the redrawn ridings. The Sudbury and Parry Sound – Muskoka ridings would essentially remain the same. 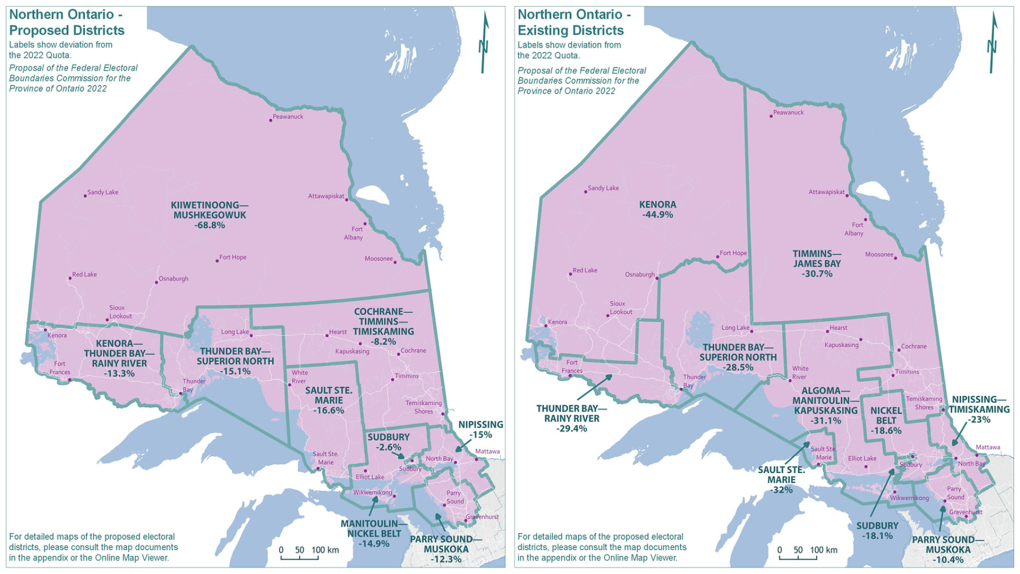 NDP MP Carol Hughes has represented Algoma-Manitoulin-Kapuskasing since being first elected in 2008.

"That’s not a proposal that any of the MPs in northern Ontario, whether we’re liberal, conservative, NDP, or I’m sure other parties that run, would be in favour of," Hughes told CTV News Northern Ontario when the proposal was first announced in August.

Liberal MP, Marc Serre, is in his third term as the MP for Nickel Belt.

"I think it’s very important to keep the ten seats in northern Ontario," Serre has said.

Timmins-James Bay MP Charlie Angus called on residents to take part in hearings gathering public feedback on a federal proposal to eliminate a riding in northern Ontario in a news as recently as Sept. 19.

“We have been through these issues before," Angus said in the release.

"And we have held our own. Northern Ontario has a right to be heard. Our regions are immense and people already feel a great sense of displacement from the political power in Canada. If citizens, groups or local leaders want to be heard, I encourage them to fill out the online forum and have their voices heard.”

Angus has set up a page on his website with information on how to fill out the form to participate in the hearings.

Here are the times and locations for the hearings:

Angus said the commission has only set aside three hearings in northern Ontario for citizens to weigh in, "and the clock is ticking on applications to speak."

"The new boundaries can only be put in place at a general election called at least seven months after the new electoral districts have been set," Elections Canada said on its website.

Canadians appear to be slowly cutting back on their use of plastic straws and grocery bags ahead of a national ban on such items that will take effect next month, new statistics show.

A public inquiry is turning its attention to the role of online misinformation this morning as it continues probing Ottawa's use of emergency legislation to quell last winter's "Freedom Convoy" protests.

An Ontario woman has been charged after graphic video of a horse being dragged emerges, Alberta Premier Danielle Smith makes an about-face on a promise to legislate human rights protections for those who aren't vaccinated against COVID-19, and a former member of the Vancouver Canucks coaching staff files a human rights complaint against the team. Here's what you need to know to start your day.