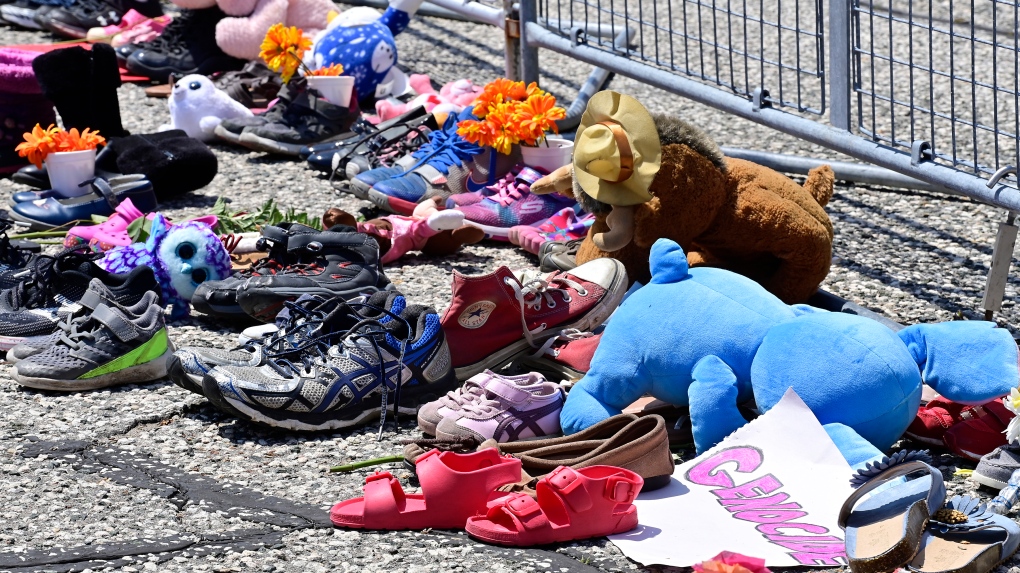 Children's shoes, stuffed animals and flowers are shown after being placed outside the Ontario legislature in Toronto on Monday, May 31, 2021. The items were placed as a tribute after the discovery of the remains of 215 children found on the grounds of a former residential school in Kamloops last week. THE CANADIAN PRESS/Frank Gunn

TIMMINS -- For local traditional healers Gary Martin and Jules Inishinapay, last week's discovery of 215 children's remains at a Kamloops, B.C. residential school proved to the nation that the injustices inflicted by the federal government on Indigenous people can no longer be ignored.

The two men are children of residential school survivors and said this is also shining a light on the trauma that surviving children brought home with them and passed down through the generations.

"My father was a very violent man," Inishinapay said. "That's how it came out of him, it's how expressed his traumas."

Parents who went to residential schools often carry with them shame and anger that develops into substance abuse and physical abuse towards others, he said.

That was the case for Inishinapay's father as well, who went to St. Anne's in Fort Albany. His father suffered from alcoholism, he said, and would often beat him and his brother.

He would also threaten suicide, Inishinapay said, saying "I'm going to kill myself" was a common phrase for his father.

His dad once shot himself in front of him and survived, he said. He was eight years old at the time and remembers having mop up the blood himself.

"I had to grow up so fast," Inishinapay said. "I had to be a parent, clean up after my parents' mess."

'Our roots as Indigenous people were cut'

His whole family had been alcoholics, Inishinapay said, including himself.

He attributes it all to the physical and sexual abuses within both the residential school system and the "Indian Day School" system, which he attended and had traumatic experiences of his own.

The symptoms of such treatment persist to this day amongst Indigenous communities.

It's a wound that only cut deeper as investigations for undocumented deaths and burial sites continue around the country, he said.

With suspicions of more unmarked mass graves, First Nations leaders are continuing to call on the federal government not only to work with Indigenous communities to investigate residential schools around the country — but to make good on their reconciliation promises.

Deputy Chief of Nishnawbe Aski Nation, Walter Naveau, said he has heard shocking stories from residential school survivors about the atrocities experienced there. He said an apology is not enough.

"Justin Trudeau should, along with minister (Marc) Miller, say 'we are going to do something about this,'" Naveau said. "We need to have answers ... not for the government to tell us lies."

Though Ottawa has now released funds from its 2019 budget to help with investigations into undocumented deaths and missing children related to residential schools, Naveau said there also needs to be a commitment to help people heal and reconnect with their culture.

Inishinapay and Martin said institutional mental health services do not adequately support the spiritual needs of Indigenous people and only put a Band-Aid on the underlying problems.

Rather, they said investing money into traditional healing practices — like those offered at the Misiway Health Centre, where they work — is what First Nations people need to come to terms with their generational trauma and find themselves again.

"We cannot change the past," said Martin, "but we can certainly pray and hope for a better tomorrow because I think our kids and our people have suffered enough at the (hands of) the federal government."

For the nation to heal from this, Martin said people need to know the full truth of Canada's relationship with Indigenous people — from residential schools to how early settlers took this land from its original owners.

That can come from education, he said, as well as hearing the stories from Indigenous people themselves.

"For the general public out there, they have to hear that missing chapter of Canadian history... and this is just the start."