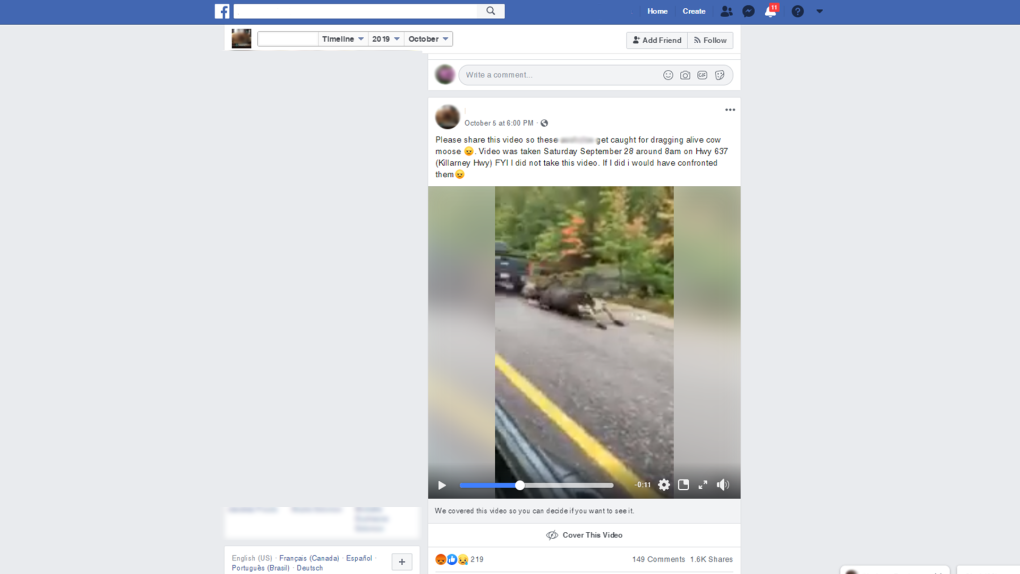 On December 12, a 73-year-old man and an 18-year-old man from Wikwemikong First Nation were arrested and charged with:

The accused were released on a Promise to Appear and are scheduled to appear at the Ontario Court of Justice in Sudbury on February 26.

Officials with the Ontario Ministry of Natural Resources and Forestry (MNRF) tell CTV News that the matter is still under investigation. No charges have been laid over the last month.

MNRF officials are investigating a disturbing incident, caught on video, of a truck dragging a live moose down the highway.

A northern Ontario woman posted the video she received from a friend of a friend to Facebook on Saturday night and it immediately sparked outrage.

Because the owner of the video is unknown, CTV does not have permission to show it.

The video, that currently has over 15,000 views, as of Monday morning, is taken from the inside a vehicle parked on the side of the road and shows a dark-coloured truck passing slowly as the person taking the video says "do you guys have a moose tag?"

As the truck passes, the camera captures a cow moose being dragged behind the truck headfirst with its legs still kicking.

In the video, you can hear another person in the car that is filming say "no they don't," before shouting is heard from the truck dragging the moose. The truck can be seen pulling over on the shoulder of the road and coming to a stop.

The occupants of the car filming the incident can be heard sniffling and upset before one says "we should go."

The woman who shared the video on Facebook says she has no idea who actually took the video, but is trying to find out.

Constable Michelle Coulombe of Nipissing West Ontario Provincial Police says the matter is being investigated by the MNRF. She says it happened on Saturday, September 28 on Highway 637 in Killarney.

Jolanta Kowalski, of MNRF, says conservation officers are investigating, but doesn't want to speculate on charges or fines at this point in the investigation.