Celebrating 20 years of butterfly science and spectacle in Sudbury SUDBURY -- The beloved butterfly gallery at Sudbury’s Science North is celebrating 20 years with special events and a look back at how it all started.

Even in the dead of winter, the exotic, colourful space transports visitors to a warm, tropical climate with breathtaking views.

It features up to 400 free-flying butterflies at one time, including 20 to 30 different tropical species.

“It’s one of the most beloved live-animal experiences at Science North because it’s immersive -- you stand in it and you have butterflies land on you and you get up-close-and-personal with species that are usually difficult to get close to because they’re so fragile,” says Julie Moskalyk, science director with Science North.

As Science North marks the 20th anniversary of the F. Jean MacLeod Butterfly Gallery, officials say they have some special exhibits in the works. The new content will be revealed on the official anniversary date of June 19.

“We’re going to bring in some special species of butterflies that we don’t normally have, we’re just figuring out which ones they are. One of the ones that we’re hoping to bring in is the Birdwing Butterfly which is the largest butterfly species in the world.” 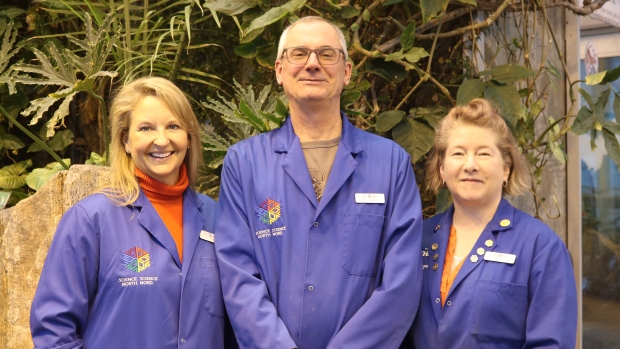 Julie Moskalyk, left, Dan Chaput and Jacquie Bertrand, who have all been with the F. Jean MacLeod Butterfly Gallery since it first opened 20 years ago, at Science North in Sudbury, Ont., on Friday, Jan. 10, 2020. (Marina Moore / CTV News Northern Ontario)

Moskalyk was part of the team that spearheaded the idea of a permanent butterfly gallery 20 years ago.

She played a role in designing the space and its content. She says the gallery was a hit from the start, and that other communities turned to the northern team for guidance.

“From the day we opened in 1984, we had live animals,” Moskalyk says. “There are some other science centres that now have them, in fact the Connecticut Science Center in Hartford, we consulted to help them design and build their small butterfly gallery.”

While the science centre first welcomed visitors in 1984, the F. Jean MacLeod Butterfly Gallery didn’t officially open until 2000. Since its inception, it has been used not only for regular tours, but also education and even weddings. It’s also used as a space to help support cancer patients at the neighbouring hospital in Sudbury, Health Sciences North.

The butterflies are transported to Sudbury in the form of pupa come from farmers in four different regions: Costa Rica, Philippines, El Salvador, Malaysia. Staff scientists say most of the species in the gallery have a two-to-three-week lifespan. 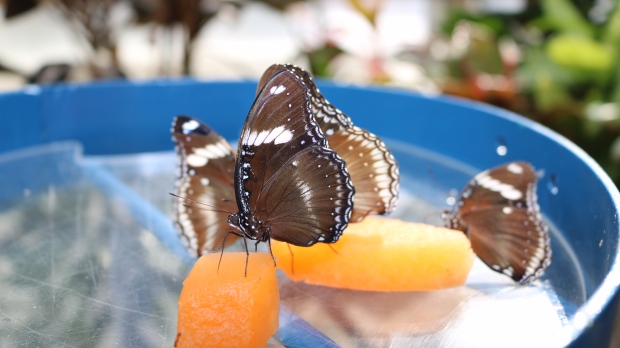 Staff scientist Dan Chaput leads the facility, and says it takes two-to-three hours of daily work to keep the gallery running, taking care of everything from butterflies through their various stages of life to birds, tropical plants and even bugs for pest control.

“It has become a passion,” says Chaput. “My first love I guess would be plant science so horticulture and botany, that kind of stuff, and then insects are of course a natural fit.”

But as the saying goes, time flies when you’re having fun -- and those who have been involved with the butterfly gallery from the start say they still feel lucky to be part of the team.

“Twenty years ago I thought I was lucky as can be to get in on this on the ground floor, and that it’s going to be here… because if Science North is doing it, it’s going to be here for quite a while,” says Jacquie Bertrand, horticulture technician with Science North. “And where else can I garden all winter long? When its cold outside I can come to work and be nice and toasty.”

Science North is closed for annual maintenance until Jan. 18, 2019.