Fran Hanover has two families: her adopted Germany family and her biological relatives.

Hanover was adopted when she only three weeks old during what was known as the 'Sixties Scoop’ -- the forced removal of children from single mothers in post-war Canada.

Records were sealed, ethnicities hidden and medical records were not included.

“I grew up as this German-speaking artsy-fartsy,” laughed Hanover.

As she got older, several people would ask whether she wanted to look for her biological relatives. At the time, she had no intention of doing so -- until her son was diagnosed with cancer.

Hanover wanted to know more about her medical background. But her attempts to trace her biological family began with redacted documents and vague details.

Until she tried Ancestry.ca.

“I spit into a tube and I opened Pandora’s Box,” said Hanover.

First, she found a cousin and then a sister who was also abandoned. They were both born in Toronto. From there, she found her brother, who was born in Buffalo, NY. Eventually, she found her six siblings and immediately connected with them.

Her newfound family told her that her biological mother, Ernestine, was an artist and an art teacher. Her siblings always tell her the resemblance between the two is uncanny. 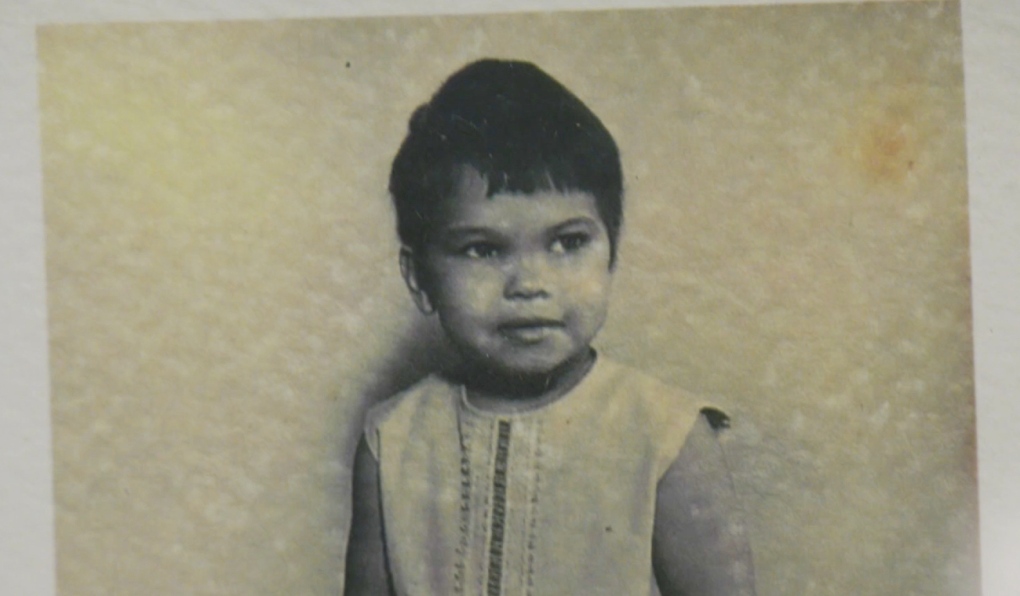 “Our childhood photos and our teenage photos, we had the same expressions,” Hanover said.

Little did she know that spitting in the tube would save her life. Ernestine died in 1991 from a brain aneurism. Hanover asked her doctor to be screened and the tests found she also had an aneurism above her eye. She had surgery to remove it.

“Had I never taken that step, I would have never found my records. It would have made a huge challenge to find her and my medical information,” said Hanover.

She then became interested in drawing her mother’s portraits and creating artwork about her journey, growing up with her adopted German family and finding her biological family. She decided to put it on display at the Callander Bay Heritage Museum and Alex Dufresne Gallery.

Her display is called 'SPIT, The Art of Disclosure.'

“It always fascinates me how artists can put so much of themselves into their artwork and this is one that very much stands out,” said museum and gallery curator Natasha Wiatr.

Hanover hopes her artwork will inspire people to be proud of who they are.

“If you are ever questioning why you are the way are, a lot of it really is nature and not nurture,” said Hanover. “It’s from somebody in our past that’s given us these gifts.”

Fran’s artwork will be on display until Nov. 13. The gallery is open from Wednesday-Saturday from 10 a.m. to 5 p.m.