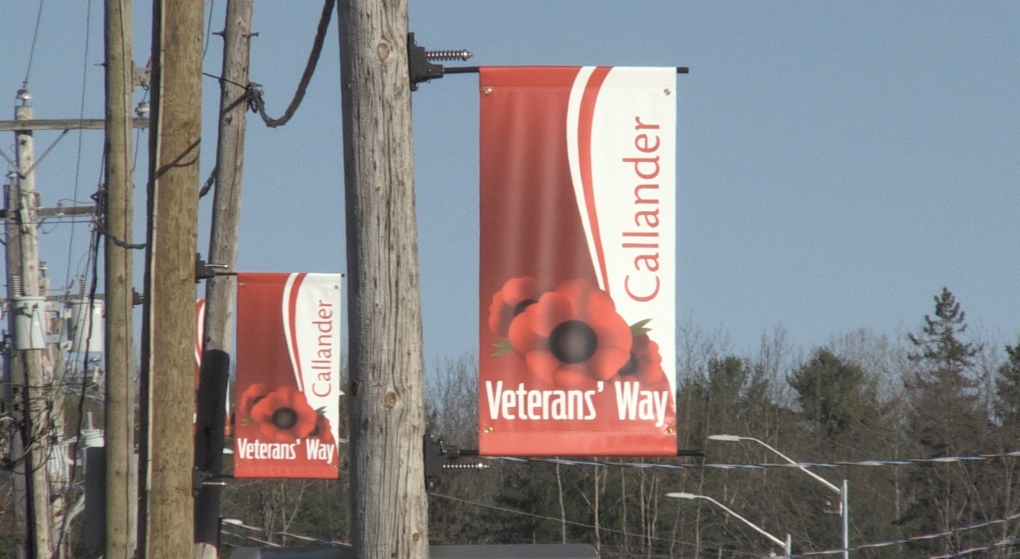 On Friday, the Municipality of Callander and Royal Canadian Legion Branch #445 officially inaugurated a section a main street as 'Veterans’ Way' to honour the men and women who served our country. (Eric Tascher/CTV News)

NORTH BAY -- On Friday, the Municipality of Callander and Royal Canadian Legion Branch #445 officially inaugurated a section a main street as 'Veterans’ Way' to honour the men and women who served our country.

As the bagpipes played and the banners were unveiled, retired Sgt. Richard Rhindress said it was a moment to cherish

"I've done tours in the Golan Heights and Bosnia with the UN,” said Rhindress, a member of the Callander Legion. “More Canadians should take to heart what veterans have accomplished."

A section of Lansdowne Street East from the cenotaph to Callander Bay Drive is now known as Veterans’ Way. However, it will continue to be named Lansdowne Street, similar to how Highway 401 is referred to as the Highway of Heroes.

The Legion approached municipal council about the idea, after seeing municipalities in southern Ontario take a similar approach.

Picard said he wants people walking on the street and drivers to reflect on the sacrifices veterans have made when they see the banners and signs.

“I just want them to pause and remember and think of the freedom they get because of these people,” said Picard, whose father served in Korea and his father-in-law fought in the Second World War.

Picard approached former Mayor Hec Lavigne about the idea and council unanimously jumped on board. Lavigne passed away earlier this year.

“What I’m really seeing it as is a reflection -- people can look at it and start reflecting and start thinking,” said current Mayor Rob Noon. “It's because of their sacrifices that we have what we have."

"In 1955, I joined the military as (part of) the Royal Canadian Army Service Core," said veteran James Dean. "I did my two years as an apprentice and then I went into the regular force.”

The entire project cost about $4,000, with $1,600 needed for yearly maintenance to the banners.

But to some, the cost is minimal when it comes to what it symbolizes to those who served our country.