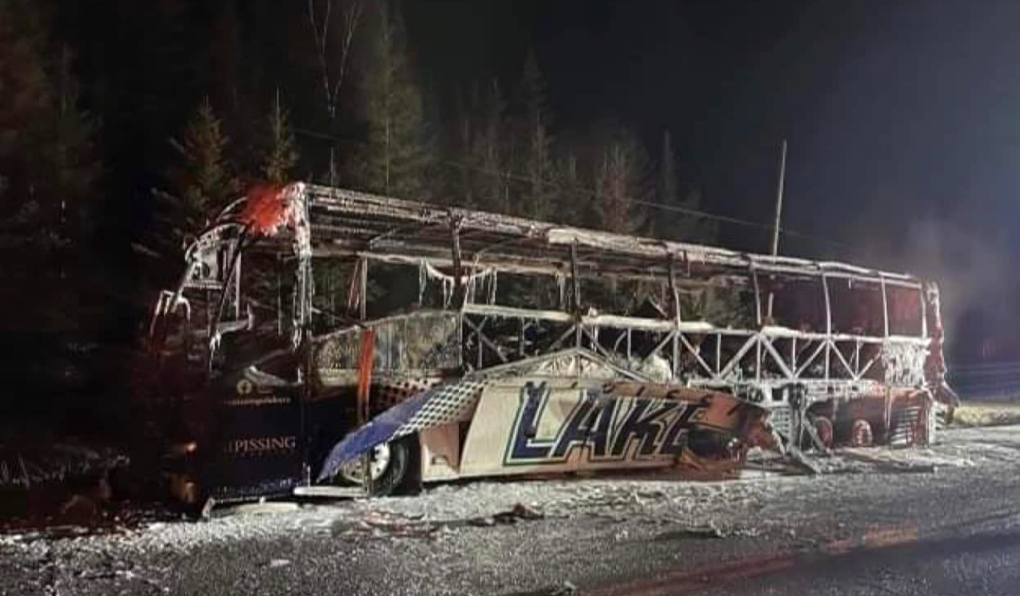 Ontario Provincial Police said the vehicle blew a tire, which sparked the flames.

It happened shortly before 7 p.m. on Highway 11 in the Kirkland Lake area as the team returned home after playing the Kapuskasing Flyers on Sunday afternoon as part of a three-game road trip.

Police said everyone got off the bus safely and there were no injuries reported. However, all of the hockey equipment and personal belongings the team had with them were lost in the blaze.

The company said the bus is a total loss. 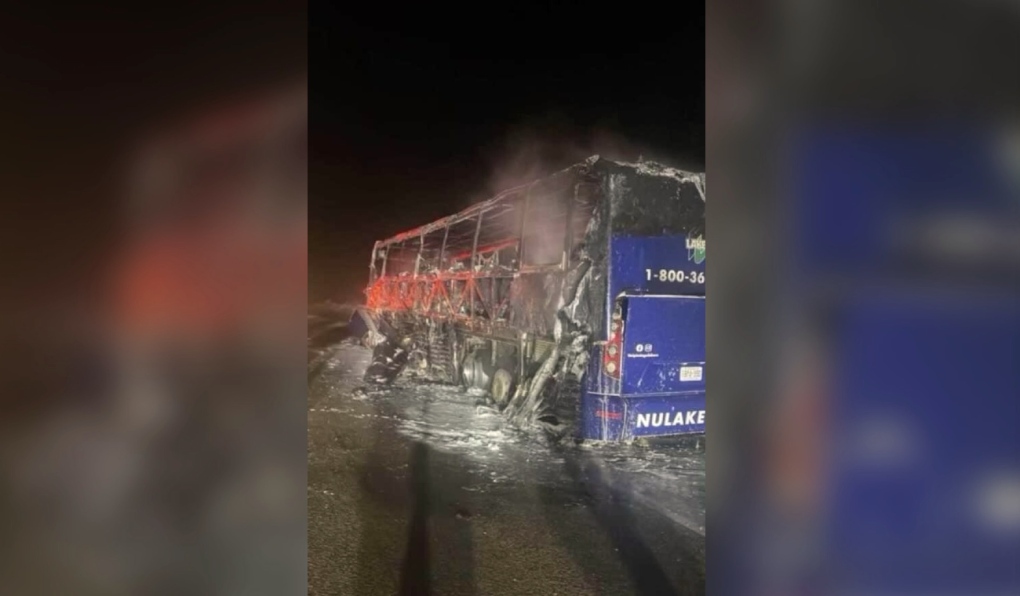 Tisdale Bus Lines Ltd. President Ron Malette credits the driver’s quick actions to ensure everyone got off the bus and away from it safely.

"We set up a rescue unit to go pick up the group. My understanding is that the OPP at the time had started transferring the passengers to the Kenogami & District Fire Rescue station to get them off the highway," Malette said.

It took roughly an hour for a new bus to be dispatched and get to the fire station to pick up the team.

Malette said he has been in contact with the team to get the equipment replaced.

"I ensured them that we’re at the plate with whatever we need to do to help the team," he said.

"Our main priority is to get the kids back on the ice. I told them whatever happens, order all the equipment and send me the bill. We’ll cover it. If it becomes an insurance issue later on, we’ll deal with it later on at that point."

A request for comment from the team was made. Coach Doug Sanders declined the opportunity citing the pending investigation.

"We would like to thank the first responders/fire department that attended the scene as well as the local community in the area of the incident that provided transportation and shelter to our players, coaches and parents while they waited for another bus to pick them up," said Scott Huycke, the North Bay & District Trappers Hockey Association president.

"We are extremely grateful that there were no injuries and everyone returned home safe from the incident."

The road was closed for several hours in both directions and reopened around midnight.

B.C. man who was mistaken for target, shot by police in 2013 has lawsuit dismissed

A B.C. man who was mistaken for the target in a police takedown and shot by an officer in 2013 has had his lawsuit alleging negligence dismissed.

Bodies are those of 3 rappers missing nearly 2 weeks: Detroit police

Three bodies found in a vacant Detroit-area apartment building have been identified as those of three aspiring rappers who went missing nearly two weeks ago, police said Friday.

For much of disgraced South Carolina attorney Alex Murdaugh's double murder trial, witnesses have talked about a generous and loving man -- but prosecutors want jurors to know that same man stole over US$4 million from his housekeeper's relatives after she died at work, and killed his wife and son to cover up his crimes.

A senior aide to Japan's prime minister is being dismissed after making discriminatory remarks about LGBTQ2S+ people.

Stars disappearing before our eyes faster than ever: report

A new research from a citizen science program suggests that stars are disappearing before our eyes at an 'astonishing rate.'