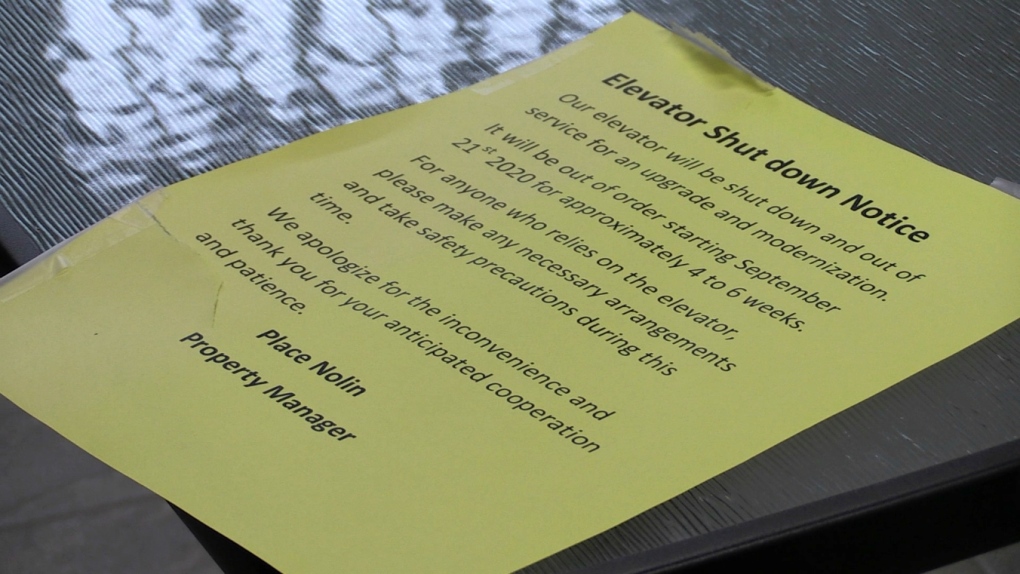 Notices have been posted on the doorways alerting tenants of the issue with the broken elevator, although no resolution date is set. (Dana Roberts/CTV News)

SUDBURY -- For more than two months, residents of a Sudbury seniors-only apartment complex have been forced to use the stairs, as the elevator has been out of commission.

Since Sept. 22, Aline Vachon has been going up and down the stairs every time she has something to do.

“They started in September,” Vachon told CTV News. “They finished at the end of September and haven’t finished the job. It’s just been left there. They keep telling us the engineers are taking care of it. Well, you don’t see the engineers here at all.”

Vachon said the communication from the management of the building has been limited, adding to the frustration.

“Right now from what I hear, they are going to come in, go ahead with the elevator, a temporary one and then later on they’ll have to come in and do it all over again,” she said.

But that doesn’t bring much peace of mind to residents, including Rita Belanger, who fears that will only push the goal line further away. Belanger is forced to take the stairs despite the fact that she is legally blind.

“Coming down the stairs I have to count every step,” she said. “If I miss one, I’ll hit the wall. I’ll fall.”

Belanger, who has lived in the building for nearly 13 years, said that she has never experienced a situation like this in that time. She said that it’s only adding to the frustrations of an already isolating year.

“The worst thing is not being able to come and go as you please because coming up and down those stairs is really hard,” said Belanger. “I’m on the third floor. Some of these people are worse off than me. I can come down the stairs. Going up, I have a hard time to breathe.”

CTV News reached out the property managers but did not receive a response. However, notices have been posted on the doorways alerting tenants of the issue, although no resolution date is set. And on Dec. 7, Carmen Lalonde of Place Nolin released this statement to CTV News regarding the elevator repair:

"Place Nolin has been seeking advice from consultants for the past few years to modernize and upgrade the elevator due to its age. The tenants, staff and contractors have all met at the beginning of March 2020 to explain the process and advise the tenants of the duration of the project.

"The project was originally due to start in May 2020 but COVID-19 delayed the project. Tenants have been advised that if they could not stay in their units, they could make arrangements to temporarily reside with family or friends, or have family or friends help them during the elevator repairs.

"On Sept. 21, 2020 the contractors were on site to start the modernization and upgrades. The elevator cab renovation has been completed but there were some unforeseen building code issues that arose and needed immediate attention and required additional inspections.

"Place Nolin received an order to remedy from the City's Chief Building Official. A short term remedy has been determined and the repairs are due to be resolved and the elevator will be reinstated for service within the next few weeks.

"Since the elevator was taken out of service, the property manager and maintenance man employed by Place Nolin have been assisting the tenants bring up their groceries and any other items to their apartments, during business hours.

"Place Nolin's board of directors and staff will be working with contractors to determine a long term strategy related to the completion of the elevator modernization project."

Monique Woolnough is executive director of the Sudbury Community Legal Clinic and said there are protections in place for tenants during a situation like this.

“Any tenant with a disability …. either they can’t use the stairs or it hurts them, they really can’t do that,” said Woolnough. "The landlord has an obligation under the Human Rights Code to accommodate them as a person with disabilities.”

An example of that could be paying for alternate, temporary accommodations on an entry-level floor or arranging and covering the costs for delivery services.

Woolnough also said that under the Residential Tenancy Act, tenants could take the landlord to court, who would then have to prove they truly did every thing they could under the circumstances to fix the issue, something she said may be difficult in this type of scenario.

With winter on the horizon, bringing wet and messy floors, the tenants simply want answers.