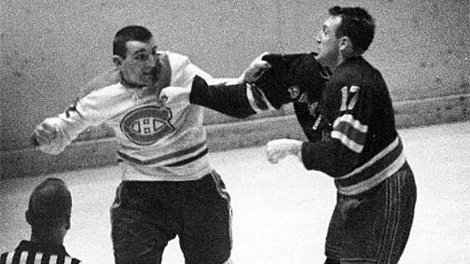 Bob Nevin is seen here fighting with John Ferguson in this file photo from 1964. Nevin has died at the age of 82. (File)

SUDBURY -- Bob Nevin, a native of South Porcupine, Ont., and fan favourite who won two Stanley Cups with the Toronto Maple Leafs, has died. He was 82.

Nevin died early Monday, according to the NHL. No cause of death was given.

The Maple Leafs, Rangers, Kings were among the organizations offering condolences on social media.

We are deeply saddened to learn of the passing of Bob Nevin. pic.twitter.com/0VtHqPSE6n

Nevin came to the Maple Leafs via junior hockey's Toronto Marlboros, where he played four seasons and helped the team to a Memorial Cup title in 1956.

He played his first full NHL season in 1960-61, scoring 21 goals as a rookie and finishing runner-up to Maple Leafs teammate Dave Keon in the Calder Trophy voting.

Nevin helped the Leafs win Stanley Cup titles in 1962 and 1963 before being dealt to the Rangers along with Arnie Brown, Bill Collins, Dick Duff and Rod Seiling in a blockbuster trade that sent star winger Andy Bathgate and forward Don McKenney to Toronto.

The Rangers are saddened to learn of the passing of Bob Nevin. A captain and fan favorite during his tenure with NYR, his honest, two-way play and leadership earned him the respect & admiration of teammates & fans alike. Our thoughts are with Bob's wife, Linda, and his family. pic.twitter.com/Vv2RP9NhZD

While Bathgate helped the Maple Leafs win another championship in 1964, Nevin became an important part of the Rangers, serving as captain of the team from 1965 to 1971.

He helped the underachieving club end a four-year playoff drought in 1967, and led the Rangers to their first series win in 21 years in 1971, when New York beat the Leafs 4-2 in the quarterfinals.

Nevin was dealt to the North Stars before the 1971-72 season and spent two seasons in Minnesota before joining Los Angeles.

His career was rejuvenated in his three seasons with the Kings. He had his highest-scoring campaign in his penultimate NHL season, putting up 31 goals and 41 assists with Los Angeles in 1974-75.

Nevin joined the World Hockey Association's Edmonton Oilers for the 1976-77 season, but suffered a broken collarbone 13 game into the campaign and retired.

Nevin, who the Maple Leafs had at No. 64 on their list of 100 all-time players released for their 2016 centennial season, lived in the Toronto area after his 19-year playing career.

"Bob was ever-present at Leafs games and within the Alumni community," the Maple Leafs said in a Twitter post. "Our deepest sympathies go out to Bob's wife Linda."

Nevin, one of the first NHL players to wear contact lenses, was part of one of hockey's more surreal moments when he lost a lens during Toronto's 1962 game against the Blackhawks in Chicago. Time was called, and players and officials dropped to their knees to scour the ice looking for the wayward lens. It never turned up.

- This report from The Canadian Press was first published Sept. 21.