It is spring in northern Ontario and that means bears are out of hibernation and are looking for food.

Over the last couple of weeks, several black bear families have been spotted in residential neighbourhoods around Greater Sudbury.

Two weeks ago, Andre Lavallee captured a video of two bears crossing his yard on Woodbine Avenue in New Sudbury, near Agincourt Avenue, around 6:30 a.m.

His video shows two black bears coming into the frame before crossing the street and walking up the driveway of the house across the road.

He shared the video on social media to warn area residents near Cambrian College to be on the lookout.

Donna Viianen was visited at her home in Azilda by a black bear and its two cubs Monday night around 9 p.m. Through her patio window, she was able to capture a photo of the adorable family. 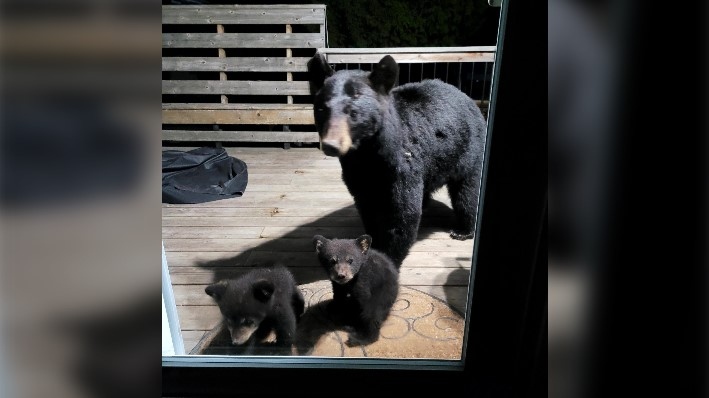 A mother black bear and her two cubs surprised a northern Ontario resident on her deck. May 2/22 (Donna Viianen)

"I found these little guys on my deck last night! The little one couldn't figure out what was blocking his way! He was sitting there tapping at my window. So cute," Viianen said.

She told CTV News one of the baby cubs was gently tapping on the window when it was joined by the mother and sibling who also peered inside for a look before wandering off to the house next door.

"We had brought our bird feeder inside earlier, but our green bin was beside the patio door. It had compost inside it. Fortunately, the bears didn't bother with it," Viianen added.

Bear cubs are born in their dens in January and emerge from hibernation weighing up to 10 pounds around April with their mothers. By the next winter, they can grow to be up to 60 pounds. Cubs usually go off on their own their second summer for mating season, which is around June.

The City of Greater Sudbury has an interactive map showing where bears have been reported in the area and which day of the week they were seen. You can also report a bear sighting here.

Quebecers are casting their votes Monday after a five-week election campaign.

The federal government has begun its search for an organization to administer an endowment fund aimed at bolstering the economic and social well-being of Black Canadians.

Sacheen Littlefeather, who declined Oscar on Brando's behalf, dies at 75

Native American actress and activist Sacheen Littlefeather, who declined the best actor award on behalf of Marlon Brando during an Oscars protest in 1973, has died aged 75, the motion picture Academy said on Monday.

Indonesian police said they were investigating over a dozen officers responsible for firing tear gas that set off a crush that killed 125 people at a soccer match, as families and friends grieved Monday for the victims that included 17 children.

Nobel win for Swede who unlocked secrets of Neanderthal DNA

Swedish scientist Svante Paabo won the Nobel Prize in medicine Monday for his discoveries on human evolution that provided key insights into our immune system and what makes us unique compared with our extinct cousins, the award's panel said.

Hurricane Orlene is poised to strike Mexico Monday, bringing heavy rain and the potential for severe flooding to popular resort areas along the west coast.