When North Bay Battalion hockey players aren't getting ready for a game, you might spot them in The Gathering Place soup kitchen serving hot meals to the city's vulnerable.

"I think it's a nice piece to meet the people of North Bay and get them lunch and it's been super nice to have my teammates here as well," said Battalion forward Dalyn Wakely.

Wakely founded the initiative, which has been dubbed ‘Wake's Sakes.’ He spoke to his billet family and team about wanting to give back to the city, while at the same time bringing awareness to the issues of homelessness in the surrounding area.

Wakely explained his teammates enjoy sitting down and talking with the clients.

"They talk about us a little bit but we get to meet with them and talk to them," said Wakely. "It's a nice give and take."

Every Tuesday for a few hours, Wakely and a few other players get behind the line and serve food during the lunch rush hour.

The soup kitchen is grateful to have a few extra helping hands.

"You hear about young people and they're all entitled and self-absorbed," said Dennis Chippa, The Gathering Place's executive director.

"These guys come in here every single Tuesday to serve and see the population." 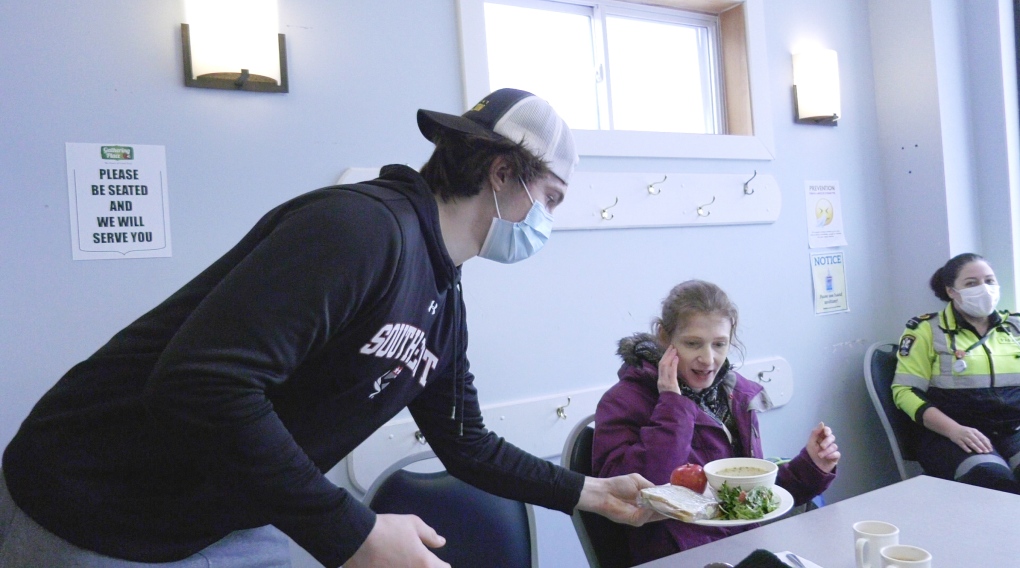 When North Bay Battalion hockey players aren't getting ready for a game, you might spot them in The Gathering Place soup kitchen serving hot meals to the city's vulnerable. (Eric Taschner/CTV News)

As part of Wake's Sakes, the hockey team holds monthly collection drives. In November, the team and The Gathering Place collected close to 400 gently used winter coats, which were distributed to the city's homeless population.

"It's really about driving not just stuff but the awareness from a group of individuals like the hockey players that we have a vulnerable population here," said Chippa.

"It's been really inspirational."

This month, the team is collecting toothbrushes and toothpaste among other hygiene products.

Wakely said he never thought the idea would be such a success.

"I knew this piece would be great,” he said.

“But I didn't know how much support we'd get from the rest of the community. It's been outstanding.”

Wake's Sakes will run until the regular season ends.