In the north, thousands of people make their living from tourism.

While the forest fires have had a big effect on some northern tourist operators, others have benefitted from this hot and dry summer.

Thomas and Larissa Klaper are visiting Canada for a couple of weeks from Switzerland. They are planning their trip back to Toronto after making an impromptu trip to Northern Ontario. 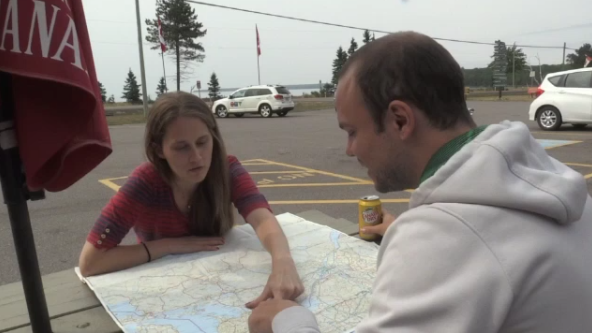 "It's an amazing scenery here. We were recommended to visit Lake Superior Provincial Park from a friend in Toronto and it was just a blast to go there. The wilderness and the landscape are just surreal." said Mr. Klaper.

They are not alone in visiting the north.

If you take a quick glance at the license plates at the Voyageurs Lodge and Cookhouse in Batchawana Bay, 45 minutes north of Sault Ste. Marie, you will see people are here from as far away as British Columbia and even places south of the border, including Missouri and Texas.

Frank O'Connor and his wife, Gail, own the four-season Batchawana Bay destination resort.

"Mostly due to the incredible weather that was out there, the state of the dollar, those things compounded together, it was a great year, terrific year. The beaches have been packed, busier than I've ever seen them in our 16 years here, and it's just lead to a great tourism season." said O’Connor.

He says it hasn't rained for a full day all summer, a first for him since he bought the business 16 years ago.

As a result of hot weather this summer, the entire hospitality industry has been very busy.

David MacLachlan is the executive director of Tourism Northern Ontario.

"In terms of some of the statistics we're able to track right now, through to the end of June, we've seen some very good growth in the hotel and motel sectors, where we're tracking on approaching double the national and provincial average to the end of June." said MacLachlan.

O'Connor says he is expecting the fall season to start and end earlier than expected, but when the leaves start changing colour, he expects to be as busy as he's been this summer and he's happy for that.