As more retail moves online, one Sudbury mall wants you to move in 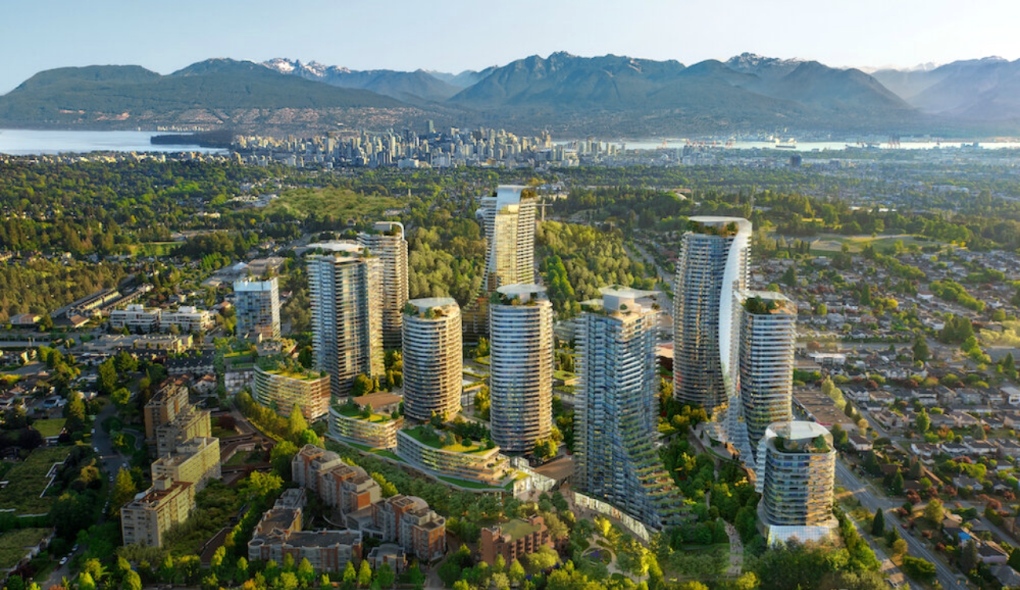 The most ambitious mall redevelopment in Canada right now is happening at the Oakridge Centre in Vancouver, where residential towers are being built along with office and other spaces, as seen in this architectural drawing. (Supplied)

SUDBURY -- It's a well-known story by now that online retailers such as Amazon are taking a huge bite out of the traditional business of urban and suburban malls across the world.

But far from a doom and gloom outlook for the long-term future, the industry is adapting to the new retail environment and finding new tenants to fill space. In Greater Sudbury, one mall is moving ahead with plans to build residential units inside the mall itself, both filling vacant space and creating a base of customers within a short walk of retailers.

Oleg Rudnitsky is vice-president of Royal Courtyards Property Management, which owns the Hanmer Valley Shopping Centre. Rudnitsky said the Hanmer mall is a great candidate for this type of repurposing.

"It's an older mall, but with good bones," he said. "The idea behind it is that we will build, inside, multi-residential units that people would be able to live there and shop. Especially considering the winters, it's going to be very convenient."

While not restricting who would live in the units, Rudnitsky said it could be a perfect situation for seniors, who would have close and safe access to shopping and services.

"With such a hard winter, they could just go for a walk around, get their shopping and go back without even getting cold," he said. "It's all about convenience."

The mall also owns land nearby, where additional residential units could be built – again, literally bringing a built-in customer base for the mall's retail tenants.

While facing the same challenges as other malls, Rudnitsky said the Hanmer mall is still healthy. Adding residential units would help secure its future long-term. While seniors seem an obvious fit, he said he can see families living there and perhaps some higher-end units.

"We're still going to be learning the (residential) market," he said. "What type would be the best use of the space?

The plan is being supported by Greater Sudbury, which has started the process of amending zoning laws to allow Sudbury's malls to incorporate residential units.

Kris Longston, manager of community and strategic planning with Greater Sudbury, said the idea for the zoning amendment started in 2017 when the city completed a separate study that included Official Plan amendments.

"During the course of that work, we had a number of stakeholder consultations with different commercial property owners," Longston said.

It was during those consultations that staff heard some malls in Canada had been rezoned to allow residential uses as part of their strategy to adapt to online retail.

Last month, the city's planning committee authorized staff to prepare a bylaw allowing the changes, with some restrictions. If approved, it would allow as much as 25 per cent of the mall to be converted to residential units, while reducing parking requirements by 10 per cent. The idea is mall residents would need less parking and would be encouraged to take advantage of well-serviced transit routes nearby.

"We did also propose that there would be a limitation of the maximum ground floor area that could be redeveloped for these higher density residential uses," Longston said. "You want to preserve that core commercial function that those sites have."

Melissa Riou, a senior planner with Greater Sudbury, said this sort of redevelopment has been done already in southern Ontario, and it has worked out very well.

"Oftentimes, having that combination of the residential use in the commercial, they the only further support the commercial uses that are there," Riou said.

City staff is hoping to have the bylaw in place before the end of the year so malls such as Hanmer's can begin work.

The most ambitious plan in Canada to adapt to the new retail reality is taking place at the Oakridge Centre in Vancouver, which closed last month until 2024. The 28-acre property is being transformed into a mixed-use centre including 10 residential and office towers, a public park, office space and community centre.

Community within the community

The former Honeydale Mall in Toronto is also being transformed to include residential units, along the lines of creating a community within the community.

Emma McCully is head of consumer insights at Potloc, which recently released a study called 'The Future of Canadian Shopping Centers.'

McCully said how a mall adapts to the new retail environment is determined in part by its location. Some malls in the south have transformed their food courts, for example, by adding high-end restaurants and other amenities to make the mall itself a destination.

"The shopping centre world is kind of changing habits," McCully said, moving away from the idea of having massive 'anchor tenants' toward having more, but smaller, tenants, who use the space for non-traditional uses.

"The idea is that intensifying the sites could benefit them and benefit the community by bringing people to commercial areas and creating these complete communities," she said.

Through market research, Potloc helps mall developers identify what amenities people would want if they were to live in a mall, taking some of the risks out of the redevelopment process.

"We can go directly to people and start asking them these sorts of questions," McCully said. "It gives our clients a sense of what the actual consumer is thinking and what they want to see and if they're interested in this type of development that's bringing commercial and residential together."

Some malls have brought in trampoline parks, or movie theatres – amenities that enhance the residential experience.

"Boardroom cafes is always a big one, somewhere where people can go and have an experience and be more social," she said. "So those types of things are what are what people are telling us."

Always in strong demand are food options beyond what traditional food courts offer.

"We see a lot of developers and people responding positively to it, wanting to try a food hall or artisan type food vendors compared to your traditional food court vendors," McCully said. "It's more upscale food more options -- even full farmers markets we've seen (inside malls.)"

As for the Hanmer Valley Shopping Centre, Rudnitsky said they hope to begin construction in the spring.

"We gave all the old drawings to architects, and they're working on a more detailed plan," he said. "We're really excited."