SUDBURY -- A Sudbury manufacturer has retooled a large part of its operation to meet the growing demand for plastic barriers.

As more retailers begin reopening their businesses, plastic barriers are becoming a common sight throughout the province.

In Sudbury, Rezplast Manufacturing now has most of its staff producing the barriers to meet rising demand.

Sandro Spadafora, vice-president of operations for Rezplast, said like many businesses, the company was facing an uncertain future at the onset of the COVID-19 pandemic.

"It was a lot of meeting with the staff to start off, talking about what can we do, how we should operate," said Spadafora.

Traditionally, the company does a lot of work in the mining industry, completing service calls for piping and tanks for places such as Vale and Glencore. However, with many clients restricting non-urgent service calls, Rezplast quickly switched its operations once demand for Plexiglas barriers started to grow.

"Smith's Market was pretty much the first one to call in," said Spadafora. "Once we talked to Smith's Market, we understood what they needed and what they wanted to do and why they were doing it.

"It kind of gave us that light, 'Hey, if we go after everybody 'cause they are going to need it, this is a really good way to do it.'"

Deemed an essential service, Smith's was just one of many businesses in need of safety solutions.

"There's no (pandemic) playbook," said Greg Smith, owner of Smith's Markets. "Nobody that I know has ever been through anything like this, so we wanted to take steps as fast and as soon as we could to make sure the staff were protected, the customers were protected."

Until last week, Spadafora said the company was focusing 100 per cent of its operations on plastic shields, but now have scaled back and are doing some service calls as more businesses lift COVID-19 restrictions.

A new problem Rezplast is facing is the overwhelming demand for plastic shields, which is putting pressure on its suppliers.

"Our partners that we use have been very good to keep us up to date," Spadafora said. "Every morning we usually have an update from them of where they're sitting from an inventory level.

"I can see it's coming to an end. They've pushed us out three to six weeks with no guarantees that we can get the material, but we have enough stock to, hopefully, get us out to next week." 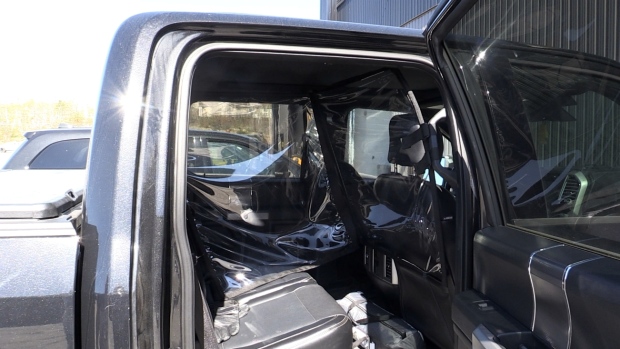 Its latest offering is a protective device for vehicles. The barrier separates the driver from rear passengers, and includes a divider that can separate rear passengers from each other, as well.

"We're separating two passengers in the back, plus the driver," he said. "But if there's ever an accident, we can literally just (rips apart Velcro) and then they can extract someone from the vehicle at the same time."

He has already seen a lot of interest in the product. He sees it being effective for car dealerships with shuttle services, as well as taxi companies.

"So instead of only having one and having to rent a vehicle to every other person, which is a big expense, now we can get three people in a vehicle safely," said Spadafora. "So they went from one to three, which is not better than the four they had, but now they're at least back to three."

As the economy slowly reopens, Spadafora said he is unsure what the future holds for the company. But he suspects they will develop a new normal.

"So now that we see there's other opportunities for us, later on down the road, hopefully the relationships we're building with these people today, they can use us tomorrow," he said.

"So if we use a food grocery store, because of the capabilities we have, we can manufacture the bulk bins that they use for bulk foods -- for Jube Jubes and that kind of thing.

"When they need that later on down the road, hopefully they'll give us a call and we can manufacture that for them."