An Espanola woman is raising money for hospital equipment

SUDBURY -- Jolene Courtemanche is on a quest to raise funds to buy a piece of equipment that will make life easier for patients at Espanola Regional Hospital.

Courtemanche has struggled with various health challenges since she was an infant and just last year, she saw a video on social media about a piece of medical equipment that could help reduce the patient trauma when getting blood work done or having an IV put in.

It's called a vein finder and it allows medical professionals to quickly find a patient's vein without having to poke and prod.

Courtemanche says it can be especially helpful for patients such as herself, with difficult venous access, as well as children.

There are several types of vein finders, but it usually involves holding an infrared light above the skin to detect and display a patient's veins.

Courtemanche says this device would have made her experience a lot easier, as she has endured a lot during her health care treatments over the years and was afraid of needles until her teenage years.

Because the provincial government does not provide funding to hospitals for this type of device, it is left up to the community to raise funds to purchase them. This has inspired Jolene to raise enough money to purchase two for her local hospital as a way to give back.

Each vein finder costs $8,100 and she wants to get one for the lab and one for the emergency department.

Over the past year, she has started several initiatives to raise the money in the small town of under 5,000 people.

Courtemanche says she has put jars out in Espanola and the nearby towns of Webbwood and Massey, and now people are asking her if they can help and chip in.

On Nov. 1, Courtemanche and a couple of volunteers donned lab coats and bagged groceries at a local store called Tanner's Your Independent Grocer. They were rewarded for their efforts and managed to collect $2,400 in donations in just one day. 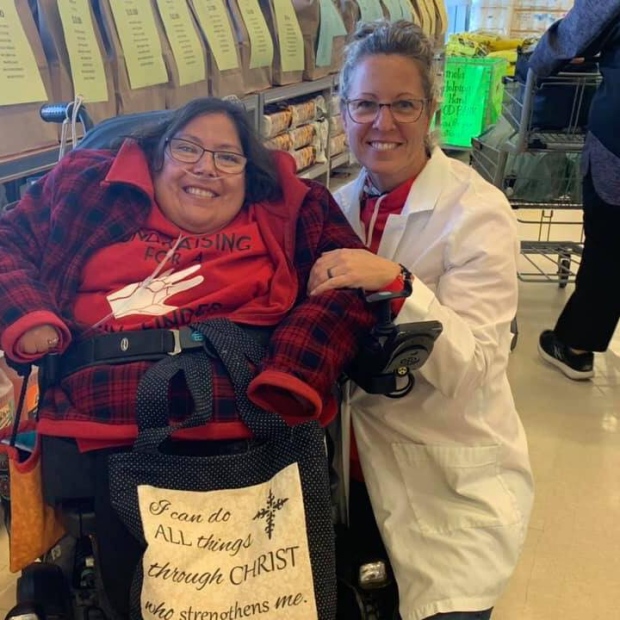 Recently, Tanner's Your Independent Grocers also asked people at the checkout counters for donations and over the course of one week, raised another $2,829.33. 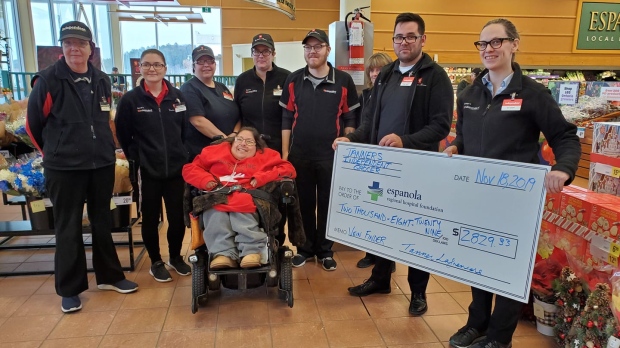 When the local paper mill, Domtar, heard about Jolene's fundraising efforts, they presented her with a cheque for $1,500 to support the project. 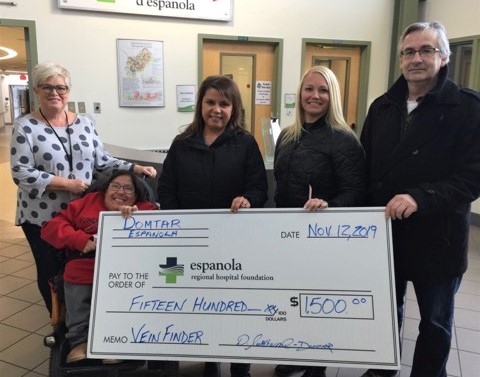 Jolene says people have stopped her around town and thanked her for her effort and asked to get involved. She says she is overwhelmed by the response from the community and she is very appreciative that they are excited about this.

The Espanola Lions Club contacted her last week to say they will be making a donation to the cause and Jolene says this will give the Espanola Regional Hospital Foundation enough money to buy the first vein finder.

Jolene says the goal is to raise enough to purchase the second device, so several more events are being planned in the near future:

Northern Credit Union will be hosting a bake sale Nov. 28.

The local legion will do a meat roll off the first week of Dec., a paint night is being organized, and a variety night is being planned for some time after the holidays.

Something that is remarkable about Jolene Courtemanche, who is in a wheelchair and is on oxygen, is her positive attitude. With her community rallying behind her, there is no doubt she will reach her goal in no time.

Donations of any denomination can be made with the Espanola Region Hospital Foundation, make sure to select the Vein Finder fund.