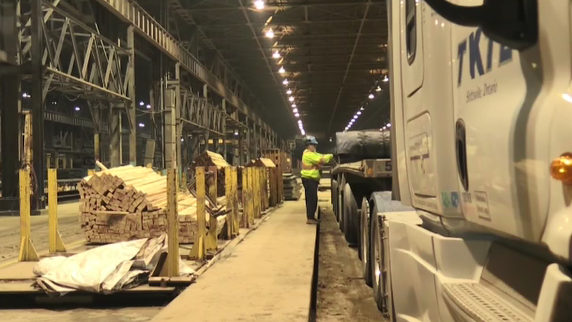 Algoma Steel announced Friday that United Steelworkers Local 2251 have agreed to take the company’s last offer to a vote by employees in the affected bargaining unit. (File)

Algoma Steel announced Friday that United Steelworkers Local 2251 have agreed to take the company’s last offer to a vote by employees in the affected bargaining unit.

Operations will continue in the ordinary course during the voting process, the company said Friday in a news release.

"The union has agreed to provide advance notice to the company to allow for a safe and orderly shutdown of operations in the event the union instructs employees to go on strike," the release said.

Michael Garcia, Algoma president and CEO, said he was pleased workers would have their say on the offer.

"The company has offered a non-concessionary, top-of-market wage and benefit package which includes a 5.5 per cent wage increase, continuation of COLA, significant improvements in pensions and benefits for employees, and enhanced retiree benefits over a four-year term that delivers the stability needed to ensure a successful transition to electric arc steelmaking," Garcia is quoted as saying in the release.

"A signing bonus is also included contingent upon no disruption to operations and uninterrupted shipments to our customers … If ratified, this agreement will help to secure our collective future, provide for sustained profitability even at the bottom of the steel cycle, and allow us to maintain the phenomenal momentum we have generated together since emerging from CCAA.”

DBRS Morningstar estimates hurricane Fiona will cause between $300 million and $700 million in insured losses in Atlantic Canada for a record high in the region.

Explosions rattled the Baltic Sea before unusual leaks were discovered on two natural gas pipelines running underwater from Russia to Germany, seismologists said Tuesday. Some European leaders and experts are pointing to possible sabotage during an energy standoff with Russia provoked by the war in Ukraine.

BREAKING | Up to 23 people taken to hospital after exposure to hydrochloric acid in St. Catharines

Up to 23 people are being taken to hospital in St. Catharines following a hazardous workplace incident on Tuesday, Niagara Health confirms.

'We shouldn't have to push people': Most provinces have not made Sept. 30 a stat

While Canada prepares to honour the second annual National Day for Truth and Reconciliation on Friday, the majority of provinces have not followed the federal government's move to make it a statutory holiday for its workers.

Canadian employers are anticipating the highest salary increase in two decades as they try to balance inflationary pressures, surging interest rates, recession risks and a tight labour market, a new survey has found.

A graduated driver's licence program in Alberta that has been in effect for the past 19 years is getting an overhaul.

Police have arrested another man in connection to an alleged violent attack on Elnaz Hajtamiri in a Richmond Hill, Ont. parking garage just weeks before she disappeared in January.

Hurricane Ian tore into western Cuba on Tuesday as a major hurricane, with nothing to stop it from intensifying into a catastrophic Category 4 hurricane before it hits Florida on Wednesday.