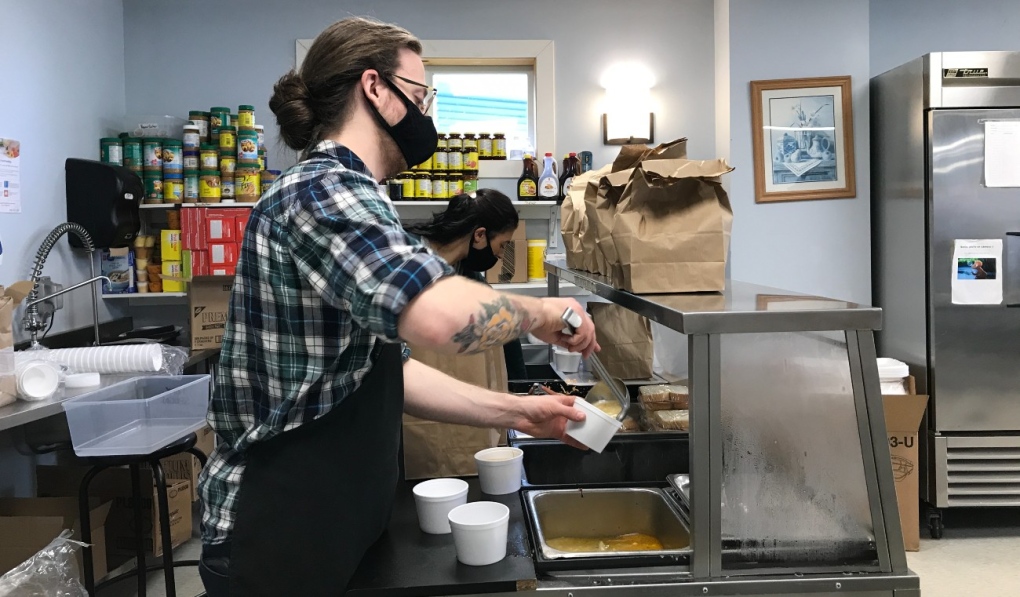 Despite the many obstacles that 2020 brought, The Gathering Place in North Bay was able to give out more meals than ever before and expand its outreach in 2020, a trend it plans to continue in 2021. (Alana Pickrell/CTV News)

NORTH BAY -- With more obstacles than most last year, The Gathering Place in North Bay managed to keep its doors open to those who need it most with one of its busiest years yet.

“We had a gigantic increase throughout the pandemic,” said executive director Dennis Chippa. “I mean, we probably figure we did 20,000-30,000 more meals than we did last year.”

The organization, a non-profit dedicated to addressing food insecurity in the community, said 2020, they harvested 2,000 pounds of food from its garden and served a total of 62,915 meals.

“It’s been a tremendously successful year. On the other hand, the fact that we’re so much in demand is also at the other end of the scale," Chippa said. "Kind of sad because it means that there is so much demand and so much concern around food insecurity in the community.”

The increased number of meals was also attributed to its expanding outreach program. Officials said the outreach allowed them to do an extra 300-400 meals a week during the last couple months of 2020.

“I think we have about 12 locations that we’re set up in right now and that includes, you know, we’re providing food for Outloud, so we’re hitting the youth groups, we’re hitting senior buildings,” said food outreach coordinator Alicia Fay. “We’ve been in talks with a couple other agencies.”

The plan is to continue to grow the service throughout 2021.

“I’m very interested specifically in reaching out to the youth population and we’re kind of in the talks of hoping to kind of do some teaching kitchens, whether it’s out of our location here or maybe some churches," Fay said. "Just really providing teaching to youth, but also making sure that they have meals that they can bring home with them.”

“We’re really focusing on our outreach program," Chippa added. "We know there are folks here who can’t get here. There’s travel difficulties. We also know there’s a lot of folks, some of the more vulnerable population that we don’t tend to always see, especially some of the elderly.

“So because of that, we know the outreach program is working to help them at least with some healthy meals a couple of times a week, and it’s probably something that were going to expand on as the year goes on.”

Right now, The Gathering Place continues to serve three meals a day, however, volunteers aren’t allowed to help and the number of staff is limited in the building. But even with the COVID restrictions, officials are making sure there are meals ready for those who need it.

“People need to eat,” said Fay. “I feel like there shouldn’t be requirements or questions asked about that. It’s just a given right for everybody. Everybody deserves to have food.”