A Sudbury family is sharing their story after their son spent a week in the hospital with respiratory syncytial virus (RSV).

Jessie and Justin Gilroy said their son, Rhett, began vomiting and had a slight cough two weeks ago.

Jessie said her son is usually a happy, bubbly boy, but something didn’t seem right.

“His breathing was becoming super short and we know now it’s because his lungs were inflamed from the virus,” she said.

After rushing their son to Health Sciences North, the Gilroys said they were grateful staff attended to him right away.

“He was crying, throwing up, you could see in it his chest, his breathing struggles,” Justin said.

They said they were told Rhett might have to be put on a ventilator in the neonatal intensive care unit.

“That was absolutely terrifying because we both haven’t slept in a full day,” Jessie said.

“We’re wondering ‘what is going on? What does that mean?’”

Rhett was then quarantined in a room with a ventilator, double IVs and he was sedated.

“It was almost six days we couldn’t hold him,” Jessie said. “We could hold his hand and talk to him and sing to him and it kind of helped him.”

Rhett gradually began to get better and was finally able to go home one week later. He turned three-months-old just a few days ago.

“He was off his ventilator and he was sitting in a little chair and he’s looking around,” Jessie said.

“He’s all happy and that was the biggest turning point.” 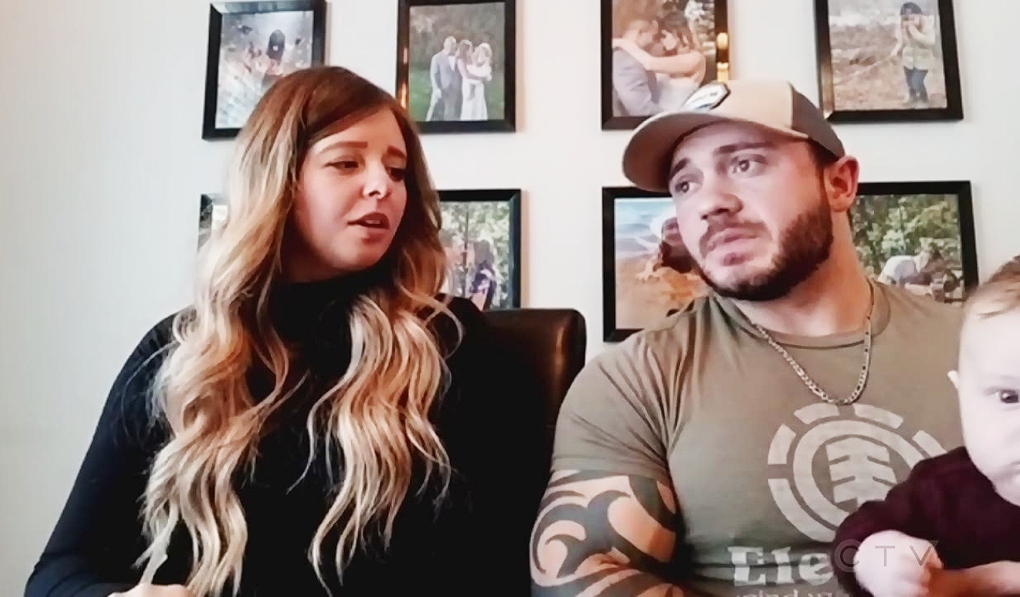 A Sudbury family is sharing their story after their son spent a week in the hospital with respiratory syncytial virus (RSV). Jessie and Justin Gilroy said their son, Rhett, began vomiting and had a slight cough two weeks ago. (Photo from video)

While their son has improved, the Gilroy’s said they are still cautious. They say they’ve cancelled their Christmas plans out of precaution.

They say they want to raise awareness about the seriousness of RSV, and respect other parents’ wishes.

“It’s crazy how one little kiss can turn to that, or one little touch of the hand can do that,” Jessie said.

“It’s something that we never thought in a million years could happen to us and it was our worst nightmare.”

The Gilroys said they limit their social contacts and don’t know how this could have happened.

Carly Zubalich from Public Health Sudbury & Districts said there’s been a surge in respiratory illnesses across Canada. In Sudbury, she said hospital visits are at an all-time high compared to pre-pandemic.

“We’re seeing a higher number than what we’ve typically seen in the past number of visits for respiratory illness for individuals under the age of 18,” Zubalich said.

For most people, she said RSV causes only mild symptoms, but some groups are more susceptible to serious illness.

“There are some populations that are more vulnerable to more severe outcomes that would include older adults,” Zubalich said.

The health unit recommends steps such as hand washing, masking in indoor spaces and staying home when sick to prevent the spread of illness.