And an 81-year-old woman from northern Ontario, who now lives just outside of Toronto, is getting to live out a dream she and her late husband had to visit the bushplane museum in Sault Ste. Marie.

Ann Roger and her husband, Bruce, shared a love of flying and made plans to come visit the Canadian Bushplane Heritage Centre, but he died before they could.

Now, Ann is fulfilling those plans with their daughter three years later.

"He wanted it so badly. I wanted to do it for him. It’s sort of; I was going to say very sad because he’s not around, and secondly, I just love to see it," said Roger.

To make matters even more difficult, just months after her husband passed, Ann was diagnosed with cancer, but she fought and survived.

Wish of a Lifetime Canada and Chartwell Retirement Residences sent Ann to the museum just a day before her late husband’s birthday, and she says the trip brings up a lot of memories.

"My life was centred around boats and airplanes, because my dad sailed on the Great Lakes as an engineer for Canada Steamship Lines. I grew up in Killarney, Ontario and we had no road, so all of our transportation was by airplane or by boat, and that’s how I met my husband. He was one of our bush pilots," said Roger laughing.

Ann says Sara, one of their five children, encouraged her to send in the wish.

"After my dad passed, this gave her a huge pick-me-up. It’s unbelievable to see her bring back so many memories of when she was younger, meeting my dad, reminiscing. It’s fantastic," said Sara.

Edie Suriano is the marketing and promotions coordinator for Canadian Bushplane Heritage Centre. She said she was very touched by Ann's museum visit.

"It was teary-eyed for a bit, but it was worth that smile that was on this lady’s face," said Suriano.

Ann’s husband, Bruce, was also a member of the RCMP. And as an extra surprise, two RCMP constables presented her with a Challenge Coin and a number of documents that belonged to Bruce. 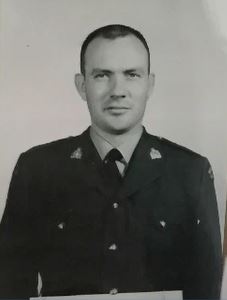 "His engagement document, a couple of his old photographs, they took photographs of us when we first joined the RCMP. Of course, there were three we provided to Ann. And then his discharge papers," said RCMP Constable Dan Chevalier.

"I couldn’t believe it when I saw them here. I’ll be honest with you. I just didn’t expect it," said Roger.

Ann says she knows Bruce is with her in spirit and she says she’s thankful for the opportunity to pay tribute to her late husband and get closure while celebrating their shared love of aviation.